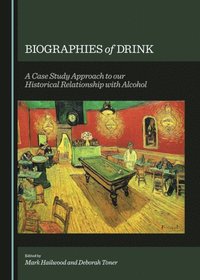 A Case Study Approach to our Historical Relationship with Alcohol

av Mark Hailwood, Deborah Toner
E-bok (PDF - DRM), Engelska, 2015-02-05
1185
Ladda ned
Spara som favorit
Ladda ned och läs i en e-boksläsare. Tips på appar
The burgeoning field of drinking studies, often ranging across and between disciplinary boundaries, explores the place of alcohol in human societies from a very diverse range of perspectives. Whilst some scholars have examined the cultural meanings and social practices associated with alcohol consumption, and its relationship to various forms of identity and community formation, others have focused on attempts to regulate or tax it, its role as a trade commodity, or its medical and psychological effects on consumers. The sheer diversity of issues upon which the study of alcohol and drinking can shed light is undoubtedly part of the strength of the field of drinking studies. At the same time, however, it can make it difficult for these different strands to consistently and fully engage with one another.This book offers an innovative methodology that will help to facilitate fruitful interactions between scholars approaching the study of alcohol from different perspectives: the &quotebiographies of drink&quote approach. Drawing inspiration from, but also going beyond, work on the &quotesocial lives of things,&quote this collection of essays showcases an approach in which each author constructs a &quotebiography&quote of a particular drink, drinking place, or idea associated with drink, in a tightly-focused historical context. The &quotebiographies&quote included range from the drinking vessels of Roman Britain to a whisky advertising campaign in 1950s America, and deal with diverse themes, from the associations between alcohol and national identity to the relationship between drinking and Existentialism.The book brings together scholarly approaches from classics, design theory, literary studies and history within the &quotebiographies&quote framework. This allows for the emergence of important areas of comparison and contrast, as well as several overarching themes, such as the close associations between different drinking patterns and notions of tradition and modernity that occur in a wide range of cultural and historical contexts. Not only, then, does this book provide fascinating case studies of interest to scholars working in particular fields or particular contexts, but it also showcases a productive new methodology which offers insights of relevance to anyone interested in the role of alcohol in any society.
Visa hela texten