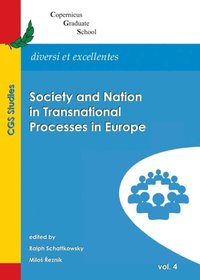 Society and Nation in Transnational Processes in Europe (e-bok)

av Ralph Schattkowsky, Milos Reznik
E-bok (PDF - DRM), Engelska, 2015-09-18
869
Ladda ned
Spara som favorit
Laddas ned direkt
Läs i vår app för iPhone, iPad och Android
The modern nation is an organisational form of society that has undergone numerous changes throughout history. The concept of the nation in Europe in the nineteenth century has been posed and answered in the past, but, as the basic conditions of its existence change, it is essential that this important question be asked again. Without doubt, the modern nation realizes the promises of solidarity and community which are so attractive to the masses, and has a profound effect on identity formation. Without these structures originally put in place by civil society, self-organization as the implementation of national thought is unimaginable. Understanding the necessity and the possibility of the designability of society through the idea of nation and the functionality of civil society determines the strength and stability of the national movement.
Visa hela texten