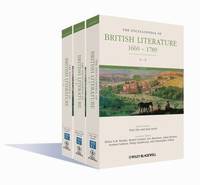 The Encyclopedia of British Literature

av Gary E Day, Jack Lynch
Inbunden Engelska, 2015-02-20
5729
Köp
Spara som favorit
Skickas inom 5-8 vardagar.
Fri frakt inom Sverige för privatpersoner.
* Provides a comprehensive overview of all aspects of the poetry, drama, fiction, and literary and cultural criticism produced from the Restoration of the English monarchy to the onset of the French Revolution * Comprises over 340 entries arranged in A-Z format across three fully indexed and cross-referenced volumes * Written by an international team of leading and emerging scholars * Features an impressive scope and range of subjects: from courtship and circulating libraries, to the works of Samuel Johnson and Sarah Scott * Includes coverage of both canonical and lesser-known authors, as well as entries addressing gender, sexuality, and other topics that have previously been underrepresented in traditional scholarship * Represents the most comprehensive resource available on this period, and an indispensable guide to the rich diversity of British writing that ushered in the modern literary era 3 Volumes www.literatureencyclopedia.com
Visa hela texten

The general editors are to be commended for this substantial addition to the reference works on British literature in the period 1660 1789. (Notes and Queries, 4 December 2016) The entries are clearly written, well-sourced and cross-referenced with related entries from the encyclopedia s three volumes. As the only stand-alone encyclopedia dedicated solely to eighteenth-century British literature, the Encyclopedia would be a useful addition to academic libraries supporting English studies in the period, though the price may be prohibitive for many smaller programmes. (Reference Reviews, 1 October 2015) "Comprehensive in its approach, this reference set is intended as "a starting point for more in-depth investigations." Accessible writing and ease of use make this a worthwhile addition to college and university libraries supporting introductory level literature courses." (Choice 2016)

Gary Day is Principal Lecturer in English at De Montfort University. His books include Re-Reading Leavis: Culture and Literary Criticism (1996), Class (2001), Literary Criticism: A New History (2008), and Modernist Literature 1890 1950 (2010). Jack Lynch is Professor of English at Rutgers University, Newark. His books includeThe Age of Elizabeth in the Age of Johnson (2003) and Deception and Detection in Eighteenth-Century Britain (2008).