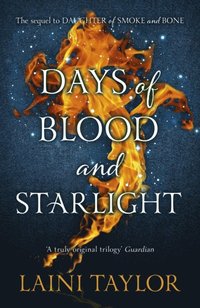 Days of Blood and Starlight (e-bok)

av Laini Taylor
E-bok (EPUB - DRM), Engelska, 2012-11-08
Den här boken kan endast laddas ned av privatpersoner.
10
Den här boken kan endast laddas ned av privatpersoner.
Ladda ned
Spara som favorit
Laddas ned direkt
Läs i vår app för iPhone, iPad och Android
Finns även som
Visa alla 2 format & utgåvor
It began with the breathtaking DAUGHTER OF SMOKE AND BONE... the story continues in the astounding, must-read sequel, DAYS OF BLOOD AND STARLIGHTOnce upon a time, an angel and a devil fell in love and dared to imagine a new way of living - one without massacres and torn throats and bonfires of the fallen, without revenants or bastard armies or children ripped from their mothers' arms to take their turn in the killing and dying. Once, the lovers lay entwined in the moon's secret temple and dreamed of a world that was a like a jewel-box without a jewel - a paradise waiting for them to find it and fill it with their happiness. This was not that world.
Visa hela texten

'I like to spread the word when I come across a book that excites me. I read Days of Blood and Starlight by Laini Taylor last weekend (sequel to Daughter of Smoke and Bone) and I'm all fired up about it. Thank you, Ms. Taylor, for a thrilling couple of days. I am in your debt. (Warning readers: this is one of those series that will have you tearing at your hair and gnashing your teeth waiting for the next installment. Be prepared.)' Stephenie Meyer 'This is Romeo and Juliet on a sprawling fantasy stage.' Guardian 'I'd been itching for the sequel of Smoke and Bone since finishing Laini's first book in one feverish sitting - and it was worth the wait. The second instalment is much darker, with more epic battles, suffering and loss ... The ending is absolutely incredible - with a twist that completely catches you by surprise, leaving you dying to find out what happens next. The only downside is that I now have to try and keep myself occupied until the next book is ready.' Glamour.com 'Plunges us into a world of beauty and horror ... intricately plotted ... it's a book that flies between worlds on blood-tipped wings and grips like a magical vice' Daily Mail 'Fantasy and romance combine in Days of Blood and Starlight ... If you've ever wondered what would happen if an angel and a devil fell in love, you're about to find out.' Sunday Express Taylor continues to build an irresistible fantasy world in this grim sequel to her masterful Daughter of Smoke and Bone ... Taylor's dazzling writing and skill at creating suspense are strong as ever; fantasy lovers will gobble up this book with satisfaction Publishers Weekly Starred Review on DAYS OF BLOOD AND STARLIGHT 'Days of Blood and Starlight reflects Laini Taylor's maturity as a writer, as well as depicting Karou's growth as the protagonist. The story is more compelling, the themes more grown up, and the romances more believable. This second book in the trilogy transports the reader to the very centre of the action; you soon forget it's a fight between ethereal being and beast; you forget that this is fantasy.' We Love This Book An epic saga, a moving love story, and a thrilling fantasy, this is the second in a truly original trilogy Living North Magazine 'Heartbreak, war and magic spells abound in this captivating romance ... There's slaying aplenty, but Taylor mitigates the violence with an unquenchable belief in the restorative powers of love and hope - and magic' Marie Claire 'Through all its beautiful writing, Days of Blood and Starlight broke my heart into a million pieces, put it all together, and then broke it again ... Taylor's writing is truly evocative, and I was amazed by where she took the story in the end. It will be a tough year, waiting for Book 3.' wingedreviews.com 'Days of Blood and Starlight is just phenomenal ... Laini Taylor, I salute you!' onceuponabookcase.co.uk 'Addictive reading ... ripped out my heart and left me gasping for air.' thepewterwolf.blogspot.co.uk 'Stunning second entry in the Daughter of Smoke and Bone series. Beautifully written with great characters' thebookbag.co.uk 'Amazing ... It's dramatic but emotional, beautiful but ugly, shocking but compelling. There are twists, there are turns, there are surprises and tears ... The book sets up the final part of the trilogy oh-so well. I loved this magical book so much ... Buy. It. Now.' Sun on Sunday Fabulous blog 'Days of Blood and Starlight was my most anticipated release of 2012 ... As always Laini Taylor's writing was absolutely sublime ... The ending to this book was absolutely incredible with plenty of twists, turns, and shock revelations. Laini Taylor has done it yet again and managed to completely surprise me ... An incredible book.' jessheartsbooks.blogspot.co.uk 'Everything about it was so well developed, plot, characters and the writing is what really makes these books beautiful, almost poetic, but then some parts can be very witty and cutting ... Without a doubt 5/5 stars! If you haven't rea

Laini Taylor is the author of three previous books, the most recent of which, Lips Touch: Three Times, was a silver medal finalist for the 2009 National Book Award. She lives in Portland, Oregon with her husband, illustrator Jim Di Bartolo, and their daughter Clementine Pie.