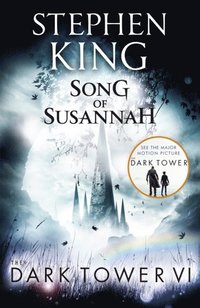 av Stephen King
(2 röster)
Häftad Engelska, 2012-02-16
105
Köp
Spara som favorit
Finns i lager! Skickas inom 1-2 vardagar.
Gratis frakt inom Sverige över 159 kr för privatpersoner.
Finns även som
Visa alla 1 format & utgåvor
SONG OF SUSANNAH is the sixth volume in Stephen King's epic Dark Tower series. The Dark Tower is now a major motion picture starring Matthew McConaughey and Idris Elba. The pivotal sixth novel in Stephen King's bestselling epic fantasy saga provides the key to the quest that defines Roland's life. Susannah has used the power of Black Thirteen to get to New York where she can give birth to a child fated to grow up as Roland's nemesis. Jake and Father Callahan set out to break her date with destiny and to find Calvin Tower, owner of the vacant lot where a magical rose grows - a rose that must be saved at all costs. Meanwhile, Roland and Eddie tumble into Maine in the Summer of 1977. Here they are greeted by the gangster Balazar and must face their maker, a man called Stephen King... JOIN THE QUEST FOR THE DARK TOWER... THE DARK TOWER SERIES: THE DARK TOWER I: THE GUNSLINGER THE DARK TOWER II: THE DRAWING OF THE THREE THE DARK TOWER III: THE WASTE LANDS THE DARK TOWER IV: WIZARD AND GLASS THE DARK TOWER V: WOLVES OF THE CALLA THE DARK TOWER VI: SONG OF SUSANNAH THE DARK TOWER VII: THE DARK TOWER THE WIND THROUGH THE KEYHOLE: A DARK TOWER NOVEL
Visa hela texten

King's magnificent uberstory is finally complete... King's achievement is startling; his characters fresh... his plot sharply drawn... It is magic. * Daily Express on THE DARK TOWER * Join the quest before it's too late * Independent on Sunday on SONG OF SUSANNAH *

'At the age of 19 Stephen decided he would like to write an epic similar to The Lord of the Rings. The 'spaghetti Westerns' of that time [specifically The Good, the Bad and the Ugly] and a poem written by Robert Browning, 'Childe Roland to the Dark Tower Came', became the inspiration for his magnum opus. The series written and published separately over a period of 22 years consists of eight books, including The Wind Through the Keyhole, and the short story, 'The Little Sisters of Eluria' published in his collection, EVERYTHING'S EVENTUAL.' From the author's website.