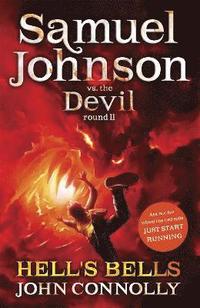 av John Connolly
Häftad Engelska, 2011-11-10
102
Köp
Spara som favorit
Finns även som
Visa alla 1 format & utgåvor
Samuel Johnson - with a little help from his dachshund Boswell and a very unlucky demon named Nurd - has sent the demons back to Hell. But the diabolical Mrs Abernathy is not one to take defeat lying down. When she reopens the portal and sucks Samuel and Boswell down into the underworld, she brings an ice-cream van full of dwarfs as well. And two policemen. Can this eccentric gang defeat the forces of Evil? And is there life after Hell for Nurd?
Visa hela texten

A demonic, darkly comic tale . . . satisfyingly peppered with science, history and amusing footnotes on everything from St Thomas Aquinas to quantum theory, and will go down well with readers of Eoin Colfer and Lemony Snicket. * <i>Daily Telegraph</i> * Brilliant. I loved every word of it. John has found a voice that compares favourably with Stephen King and Monty Python which is not an easy trick. -- Eoin Colfer Destined to be another runaway success appealing to both young adults and their parents alike. * <i>Sunday Independent</i> *

John Connolly is author of the Charlie Parker mysteries, The Book of Lost Things, the Samuel Johnson novels for young adults and, with his partner, Jennifer Ridyard, the co-author of the Chronicles of the Invaders. John Connolly's debut - EVERY DEAD THING - introduced the character of Private Investigator Charlie Parker, and swiftly launched him right into the front rank of thriller writers. All his subsequent novels have been Sunday Times bestsellers. In 2007 he was awarded the Irish Post Award for Literature. He was the first non-American writer to win the US Shamus award and the first Irish writer to win an Edgar award. BOOKS TO DIE FOR, which he edited with Declan Burke, was the winner of the 2013 Anthony, Agatha and Macavity awards for Best Non-Fiction work.