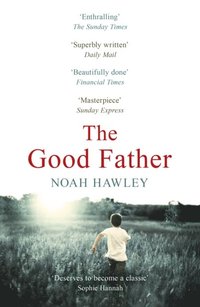 av Noah Hawley
E-bok (EPUB - DRM), Engelska, 2012-03-29
Den här boken kan endast laddas ned av privatpersoner.
41
Den här boken kan endast laddas ned av privatpersoner.
Ladda ned
Spara som favorit
Laddas ned direkt
Läs i vår app för iPhone, iPad och Android
Finns även som
Visa alla 3 format & utgåvor
From the creator and writer of the Emmy Award-winning series Fargo, based on the Oscar-winning Coen Brothers film.An ordinary boy with an ordinary life stands accused of killing the next president of the United States.WHAT HAPPENED?Dr Paul Allen is a well-respected man. He lives a happy, comfortable life with his second wife and their family. Until the night when a knock at the door blows his world apart: a hugely popular presidential candidate has been shot, and they say the young man who pulled the trigger is Paul's son.Daniel, the only child from his first, failed marriage, was always a good kid and Paul is convinced his quiet boy is not capable of murder.Overwhelmed by a vortex of feelings, Paul embarks on a mission to understand what happened and why. Following the trail of his son's journey across America, he is forced to re-examine his life as a husband and a parent, and every decision he ever made.What follows is a powerfully emotional and suspense-filled quest that keeps you guessing to the very end.'Monsters don't just become monsters, after all.'
Visa hela texten

Brilliant and heartbreaking, The Good Father is a thriller, a mystery and above all else a savagely contemporary, hugely important story ... it will haunt the reader for a long time. Tony Parsons It is rare that a novel so considered is also so gripping. Intense and utterly humane, THE GOOD FATHER is a book, the moment you finish it, you just know you will want to read again. A tremendous achievement. Simon Lelic Riveting, moving, unique. This novel deserves to become a classic. Sophie Hannah I read THE GOOD FATHER into the small hours. It is that rare gem: a genuine literary thriller, as deep as it is wide. A beautiful, moving and important novel. Erin Kelly, author of The Poison Tree An unblinking look at the ills of modern America, and a conclusion: love might address them in a way that wealth cannot. Justin Webb, presenter of the Today programme on BBC Radio 4 An examination of conspiracy theories and political assassinations. Mark Billingham Noah Hawley's flawless writing and staggeringly impressive narrative authority make THE GOOD FATHER so harrowingly plausible ... a memorable, moving and unputdownable masterpiece. Sunday Express To what extent can a father's actions mess up his child's life? How responsible is a parent when their child does something really wrong? These are the questions posed by the American author Noah Hawley's gripping new novel, THE GOOD FATHER, and perhaps it is because these questions feel particularly relevant now that the novel has struck such a chord. The Sunday Times Style magazine This debut ... explodes like a hand grenade with a force that drives the breath from your body. But, like every great story, it starts from a simple premise - what if your son assassinated a presidential candidate in the United States? Could you believe it? Would you blame yourself? ... This isn't only a forensic examination of modern fatherhood; it's also a brutal attack on U.S. gun culture, and a reflection on the country's appetite for assassination. Haunting, terrible and yet utterly real, it's superbly written with a marvellous feel for the American landscape and its soul. It's also a tantalising thriller. Daily Mail THE GOOD FATHER packs [a] considerable emotional punch. Not as a harrowing investigation of evil, a critique of gun violence in America or a guide to good parenting, but as an account of a father finally accepting his child, for better or worse, until death do them part. Male readers: get your hankies at the ready. Independent on Sunday This is something different: edgy and confrontational in its treatment of the devastating effects of America's gun culture but shot through with real emotional heft and featuring characters it is impossible not to care about ... powerful, involving and full of provocative invective. Daily Express Timely and unsettling ... [a] curious but beguiling mixture of fact and fiction Telegraph Gripping ... echoes Don DeLillo The Sunday Times An agonizing but irresistible look into the souls of a killer and a man who always thought he was a good, or good enough, father. Wall Street Journal Tackles the theme of parental soul-searching in the face of a child's arrest for a criminal ... a powerful narrative that builds relentlessly to a stunning emotional climax. Chicago Tribune An exploration of the anxieties and challenges of parenthood, the flimsy grasp we have on our pasts when it most counts, and, ultimately, the extent to which our characters and fates are shaped by nature, nurture and chance ... Family, the book seems to be saying, never breaks down completely, no matter how neglected or strained. Paul's instinctive willingness to take on the world for his son, at all costs, is a moving evocation of the bonds of blood ... the prose has all the qualities of modern literary classic. Huffington Post UK Ostensibly a crime thriller, in American screenwriter Noah Hawley's hands it plays out more as a meditation on fatherhood with a subplot that brilliantly subverts the romanc

Noah Hawley is the author of three previous novels, including The Punch and A Conspiracy of Tall Men. He created and ran the ABC television shows The Unusuals and My Generation, and wrote the film Lies & Alibis. Noah's short fiction has appeared in the Paris Review. He currently splits his time between Los Angeles, CA and Austin, TX, where he lives with his wife and daughter. Visit Noah's website at www.noahhawley.com and follow him on Twitter @noahhawley