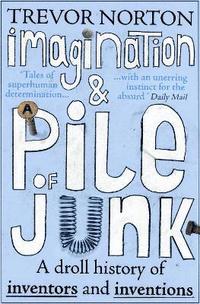 Imagination and a Pile of Junk

A Droll History of Inventors and Inventions

av Trevor Norton
Häftad Engelska, 2015-06-04
159
Köp
Spara som favorit
Finns även som
Visa alla 1 format & utgåvor
'In his whistle-stop tour of inventions large and small, the scientist Trevor Norton shares the Gershwins' view that invention is fundamentally comic.' The Sunday Times Trevor Norton, who has been compared to Gerard Durrell and Bill Bryson, weaves an entertaining history with a seductive mix of eureka moments, disasters and dirty tricks. Although inventors were often scientists or engineers, many were not: Samuel Morse (Morse code) was a painter, Lazlow Biro (ballpoint) was a sculptor and hypnotist, and Logie Baird (TV) sold boot polish. The inventor of the automatic telephone switchboard was an undertaker who believed the operator was diverting his calls to rival morticians so he decided to make all telephone operators redundant. Inventors are mavericks indifferent to conventional wisdom so critics were dismissive of even their best ideas: radio had 'no future,' electric light was 'an idiotic idea' and X-rays were 'a hoax.' Even so, the state of New Jersey moved to ban X-ray opera glasses. The head of the General Post Office rejected telephones as unneccesary as there were 'plenty of small boys to run messages.' Inventomania is a magical place where eccentrics are always in season and their stories are usually unbelievable - but rest assured, nothing has been invented.
Visa hela texten

In his whistle-stop tour of inventions large and small, the scientist Trevor Norton shares the Gershwins' view that invention is fundamentally comic... Some of the most amusing bits of Norton's book - whose short chapters encourage you to dip in at random rather than read sequentially - concern those inventions that didn't quite make the grade... Another source of comedy in Norton's history of invention is our changing sense of what matters. * The Sunday Times * In Norton's breezy telling of man's progress, it is not necessity that is the mother of invention, but other inventors. * Mail on Sunday * A new book tells the remarkable stories behind our everyday lives. * Daily Express * He tells these tales of super-human determination with a sharp twinkle in his eye and an unerring instinct for the absurd. * Daily Mail * Norton humanises honest science and sincere endeavour with humour and respect. * The Times * Most such histories concentrate either on the Eureka moments or try to convey the mix of inspiration and perspiration that leads to great discoveries. Norton's hugely entertaining romp does both of those, with a large dose of butterscotch ripple provided by the less talented rivals to Archimedes and Edison... For thanks to diligent research Norton has traced the hilarious failures that came before the Eureka moments. Crackpot ideas and great inventions have rarely been combined before to give such a complete and utter picture of the process of inventiveness at its least and most successful... all these and many other necessary failures are lovingly documented by Norton in his all-too-true story of invention. * Daily Express * Norton tells engaging stories in a very readable manner. * Financial Times * This fascinating compendium of pioneering progress gives the background to these and many other technological and medical advances... Trevor Norton didn't invent the concept of a great read - but with this wry, entertaining look at the brains behind the breakthroughs, he has definitely delivered on. * Daily Record * It's a great mix of the history of crackpot ideas and outstanding inventions that demonstrates the process of inventiveness both at its best and worst. * Bournemouth Daily Echo * Norton takes us on an informative dash through the inventors who have changed our lives with their creations. From tiny transistors to Brunel's great iron ships, their stories spring from this book's pages with good humour and wit. This sympathetic look at the trials of pioneering something revolutionary offers glimpses into the history of invention, explaining how these remarkable men became the pathfinders of modern commercial and domestic life. * The Lady *

At school Trevor's speciality was failing exams. Then he became entranced by a TV series in which Hans Hass went Diving to Adventure with his beautiful wife Lotte. From that moment he knew he had to become a marine biologist. To everyone's surprise he began to pass exams. Later on Trevor held a Personal Chair at Glasgow University and was then appointed Professor of Marine Biology at Liverpool University and director of its Marine Laboratory. He has been the president of two Learned Societies and served on the expert assessors' panel and the policy panel of the European Commission for funding major international research projects. Also a member of the annual review committee of the British Antarctic Survey, and chairman of the Aquatic Science Committee of the Natural Environment Research Council, and a Fulbright-Hayes Fellow in the United States. In addition to180 scientific articles he has also penned 30 magazine articles. Following retirement Trevor became Emeritus Professor at Liverpool University and an Honorary Senior Fellow affiliated to the Centre for Manx Studies. His efforts at literary non- fiction have been critically acclaimed on both sides of the Atlantic, and his writing has been compared to that of Bill Bryson, Gerald Durrell and Rachel Carson. He has published widely on ecological topics. His much acclaimed books include Stars Beneath the Sea, Reflections on a Summer Sea and Under Water to Get out of the Rain. Trevor lives on the Isle of Man with his wife..