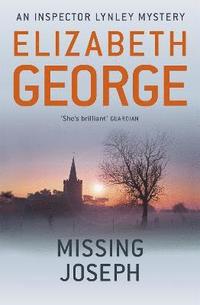 av Elizabeth George
(1 röst)
Häftad Engelska, 2012-06-07
113
Köp
Spara som favorit
Finns även som
Visa alla 1 format & utgåvor
When Deborah St James hears of the unexpected death of Reverend Sage, her sadness has a very personal tinge. For their paths had crossed some months earlier at a particularly vulnerable time for Deborah, and she had found herself confessing her intimate anguish to this sympathetic stranger. When she realizes that his death is far from accidental, Deborah, with her husband, Simon, enlists the help of Inspector Lynley, and the trio embark upon an investigation that hinges upon the overriding - and ultimately destructive - power of parental love.
Visa hela texten

Elizabeth George is the author of highly acclaimed novels of psychological suspense. She won the Anthony and Agatha Best First Novel awards in America and received the Grand Prix de Litterature Policiere in France. In 1990 she was awarded the prestigious German prize for international mystery fiction, the MIMI. Her novels have now been adapted for television by the BBC. An Edgar and Macavity Nominee as well as a New York Times and international bestselling author, Elizabeth George lives on Whidbey Island in the state of Washington. Visit Elizabeth`s website at www.elizabethgeorgeonline.com