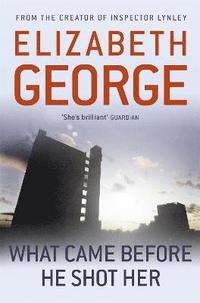 What Came Before He Shot Her

av Elizabeth George
Häftad Engelska, 2012-09-13
129
Köp
Spara som favorit
Finns även som
Visa alla 1 format & utgåvor
The shocking conclusion of Elizabeth George's previous bestseller, WITH NO ONE AS WITNESS, saw the wife of New Scotland Yard's Thomas Lynley gunned down in the street outside her home. Under arrest for the crime is a twelve-year-old boy, Joel Campbell. What possible motive could he have? What chain of events could have led such a child from the housing estates of North Kensington to the elegant streets of Belgravia with such deadly intent? The answer to these questions is a complex mixture of fate and circumstance. Abandoned (albeit involuntarily) by his parents, Joel and two siblings are dumped on the doorstep of his aunt's house. Kendra, childless and with two marriages behind her, is doing her best to turn her life around; responsibility for three troubled children is not what she had in mind. Drugs, neglect, violence and poverty are commonplace in North Kensington. Joel does his best to look out for his family, but that involves a Faustian pact. And the Devil will have his pay.
Visa hela texten

Elizabeth George is the author of highly acclaimed novels of psychological suspense. She won the Anthony and Agatha Best First Novel awards in America and received the Grand Prix de Litterature Policiere in France. In 1990 she was awarded the prestigious German prize for international mystery fiction, the MIMI. Her novels have now been adapted for television by the BBC. An Edgar and Macavity Nominee as well as a New York Times and international bestselling author, Elizabeth George lives on Whidbey Island in the state of Washington.