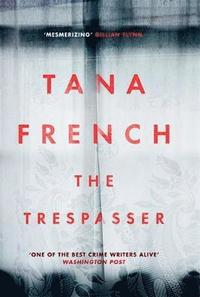 av Tana French
Inbunden Engelska, 2016-09-22
110
Köp
Spara som favorit
Finns även som
Visa alla 1 format & utgåvor
'Contains the most tense and serpentine interrogation scenes outside of John Le Carre' - Guardian This is the case she imagined. Precision-cut and savage, lithe and momentous. Antoinette Conway, the tough, abrasive detective from The Secret Place, is still on the Murder squad, but only just. She's partnered up with Stephen Moran now, and that's going well - but the rest of her working life isn't. Antoinette doesn't play well with others, and there's a vicious running campaign in the squad to get rid of her. She and Stephen pull a case that at first looks like a slam-dunk lovers' tiff. All she and her partner have to do is track down Lover Boy and bring him in. Then it'll be back to business as usual, watching from a distance as the real detectives go up against the psychopaths. Except when Antoinette takes a good look at the victim's face, she realises she's seen her somewhere before. And suddenly the conviction that there's a different answer takes her breath away.
Visa hela texten

First-rate . . . her procedural thoroughness takes her deeper and deeper into a wholly convincing portrayal of Dublin police. -- David Hare * Guardian * French's gripping sixth novel checks every box from prose to plotting to suspense to characterisation. I'm working my way through the Dublin Murder Squad series and they're stellar. * Big Issue * Perfect winter reading. Tana French's Dublin Murder Squad series are up there with the most read on our 50 book challenge discussions. This is no surprise since her books offer readers compelling, intelligent thrillers with brilliant characters - including the tough and foul-mouthed detective, Antoinette Conway, the narrator of this twisty and thrilling story * Mumsnet Best books for Christmas * Best Crime Title of the Year * Daily Mail * This is crime writing at its most sublime: spell-binding story-telling with a heroine to treasure in Detective Antoinette Conway . . . Tana French's reputation has been growing steadily in recent years and she is now at her peak, as this superb novel underlines * Daily Mail * A clever and well-crafted read. * Sun * Tana French's thrillers are consistently good - well-plotted, intelligent, with memorable characters - and her latest, THE TRESPASSER, does not disappoint. * Good Housekeeping * Thrillers are a dime a dozen. The trick is to find something that actually sticks to the ribs. This fall will bring a new release from one of the best crime writers working today, Tana French. But that book, The Trespasser, is actually her sixth. She has five novels you can buy right now, though you should read them in the order in which they were published, starting with In the Woods. I can do you no greater favour in life than recommending that you read her books. * Guardian.com * A gnarly, absorbing read, and a finely tuned slice of wintry gloom from one the best thriller writers we have. * Observer * The Trespasser contains the most tense and serpentine interrogation scenes outside of John Le Carre . . . Shows French to be a one-off phenomenon. -- Mark Lawson * Guardian * French and The Trespasser merit all the praise we can heap on them. If 2016 has a better crime thriller to offer, I've not yet read it. * New Books Magazine * Its single voice is brilliantly sustained . . . and the book is a clever and intriguing experiment - the default technique of the psychological thriller, first-person female narration, deployed instead in a procedural whodunit. * Sunday Times * A beautifully wrought murder mystery and investigation into what it means to be a murder detective. * Mail on Sunday * Another gripping tale, beautifully told, by a woman at the top of her game. * Sunday Independent * Taut, twisty, packed with all-too believable characters and rattles along at breakneck speed. * Woman & Home * The narrator this time is the wonderfully foul-mouthed, bad-tempered detective Antoinette Conway. And her narrative voice proves to be just as entertaining as I'd hoped, with a wonderfully salty and sometimes cruel sense of humour . . . At last it looks like a police procedural series from this side of the Atlantic can rival the best of the Americans. * Sunday Express * I'm a huge fan of hers and have read all her novels. -- Cecilia Ahern * The Lady * She's fast becoming our fave crime/thriller writer, as this latest offering is flipping brilliant! * Fabulous Magazine * French's psych-profile shtick is so sharp, she ensures we're wrapped up, too . . . the big reveal can hit you like a loaded punch * Crime Scene * One of this year's most anticipated books * Stylist * Get ready to get comfy on the sofa with this clever, compelling and creepy thriller - it's quite possibly French's best to date. * Closer Magazine * A tense study in paranoia, delivered with French's customary adroitness. It's not hard to see why such writers and Stephen King and Gillian Flynn are admirers. -- Barry Forshaw * Crime Time * This is story-telling at the highest level, packed with sparky d