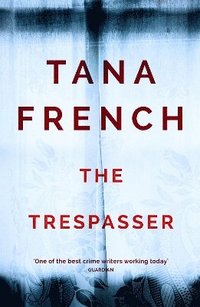 av Tana French
Häftad Engelska, 2017-04-20
122
Köp
Spara som favorit
Kan levereras innan julafton!
Finns även som
Visa alla 1 format & utgåvor
The masterful Richard & Judy pick, from the Sunday Times bestselling author. Winner of the Irish Book Awards Crime Fiction Book of the Year. 'A TRULY GREAT WRITER' Gillian Flynn, author of Gone Girl 'ONE OF THE BEST CRIME WRITERS WORKING TODAY' Guardian You can beat one killer. Beating your own squad is a whole other thing. Being on the Dublin Murder squad is nothing like Detective Antoinette Conway dreamed. Her working life is a stream of thankless cases and harassment. Antoinette is tough, but she's getting close to the breaking point. The new case looks like a regular lovers' quarrel gone bad. Aislinn Murray is blond, pretty and lying dead next to a table set for a romantic dinner. There's nothing unusual about her - except that Antoinette has seen her somewhere before. And her death won't stay neat. Other detectives want her to arrest Aislinn's boyfriend, fast. There's a shadowy figure at the end of Antoinette's road. And everything they find out about Aislinn takes her further from the simple woman she seemed to be. Antoinette knows the harassment has turned her paranoid, but she can't tell just how far gone she is. Is this the case that will make her career - or break it? 'ONE OF THE BEST THRILLER WRITERS WE HAVE' Observer
Visa hela texten