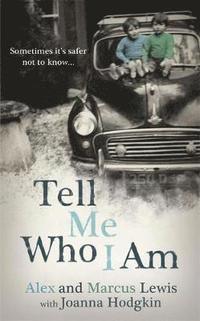 Tell Me Who I Am: Sometimes it's Safer Not to Know

Imagine waking up one day to discover that you have forgotten everything about your life. Your only link with the past, your only hope for the future, is your identical twin. Now imagine, years later, discovering that your twin had not told you the whole truth about your childhood, your family, and the forces that had shaped you. Why the secrets? Why the silences? You have no choice but to begin again. This has been Alex's reality: a world where memories are just the stories people tell you, where fact and fiction are impossible to distinguish. With dogged courage he has spent years hunting for the truth about his hidden past and his remarkable family. His quest to understand his true identity has revealed shocking betrayals and a secret tragedy, extraordinary triumph over crippling adversity and, above all, redemption founded on brotherly love. Marcus his twin brother has sometimes been a reluctant companion on this journey, but for him too it has led to staggering revelations and ultimately the shedding of impossible burdens. Their story spans continents and eras, from 1950s debutantes and high society in the Home Counties to a remote island in the Pacific and 90s raves. Disturbing, funny, heart-breaking and affirming, Alex and Marcus's determination to rebuild their lives makes us look afresh at how we choose to tell our stories.
Visa hela texten

Alex and Marcus Lewis were born in 1964. They grew up in London and Sussex. They have travelled extensively. Severe dyslexia has led them to many unusual and colourful jobs and their major success has been building Fundu Lagoon, a boutique hotel famous through Africa. They also have a thriving property business. They are both married with young children. This is their first book. Joanna Hodgkin read history at Somerville College. As Joanna Hines she has written 11 novels, both psychological thrillers and historicals, which have been translated into more than 8 languages. Her biography/memoir of her mother, Amateurs in Eden, The Story of a Bohemian Marriage, was published in 2012 to widespread acclaim. She lives in London.