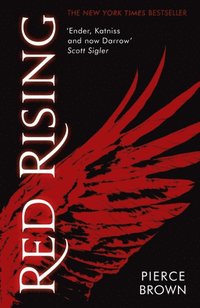 av Pierce Brown
E-bok (EPUB - DRM), Engelska, 2014-01-28
Den här boken kan endast laddas ned av privatpersoner.
25
Den här boken kan endast laddas ned av privatpersoner.
Ladda ned
Spara som favorit
Laddas ned direkt
Läs i vår app för iPhone, iPad och Android
Finns även som
Visa alla 1 format & utgåvor
NEW YORK TIMES BESTSELLER NAMED ONE OF THE BEST BOOKS OF THE YEAR BY ENTERTAINMENT WEEKLY, BUZZFEED, GOODREADS AND SHELF AWARENESSPierce Brown's heart-pounding debut is the first book in a spectacular series that combines the drama of Game of Thrones with the epic scope of Star Wars. **********'Pierce Brown's empire-crushing debut is a sprawling vision . . . Ender, Katniss, and now Darrow' - Scott Sigler, New York Times bestselling author of Pandemic'[A] top-notch debut novel . . . Red Rising ascends above a crowded dystopian field' - USA Today**********Darrow is a Helldiver. A pioneer of Mars.Born to slave beneath the earth so that one day, future generations might live above it.He is a Red - humankind's lowest caste. But he has something the Golds - the ruthless ruling class - will never understand.He has a wife he worships, a family who give him strength. He has love.And when they take that from him, all that remains is revenge . . .
Visa hela texten

The heart-stopping excitement of the Hunger Games meets the pulse-pounding majesty and complexity of Game of Thrones, all wrapped up in the visionary beauty and melancholy of Blade Runner... A shot of adrenalin for your imagination. Star Magazine RED RISING wouldn't exist without the countless classics it takes its cues from, but this great debut builds a formidable fortress upon their familiar foundations, making such interesting alterations along the way that its piecemeal parts are essentially rendered unrecognisable. Like mankind has in the past, Pierce Brown reaches for the stars, and mostly hits that monumental mark. http://www.tor.com/blogs/2014/01/book-review-red-rising-pierce-brown With all of the tension of The Hunger Games and heady dose of savagery that lives somewhere in the space between The Lord of the Flies and ancient Greek mythology that revels in the violent deeds of the deities of old, RED RISING is compulsively readable and exceedingly entertaining. The blend of familiar and unfailingly effective machinations that clash with the stark new reality Brown has created make this tale a must for both fans of classic sci-fi and fervent followers of new school dystopian epics. http://fantasyreviewbarn.com/dystopia-review-red-rising-by-pierce-brown/ It has hints of Harry Potter and Hunger Games, but it is its own animal. And it is not YA. The writing is excellent and the story is better. This is one terrific fantasy book, and I wouldn't hesitate to recommend it to anyone. Terry Brooks Incredible Sci-Fi Cross Between 'Hunger Games' And 'Enders Game' Pulls It Off http://www.idigitaltimes.com/articles/20483/20131023/red-rising-review-incredible-sci-fi-cross.htm RED RISING is what The Hunger Games should have been. http://www.fictionvortex.com/2013/07/red-rising-by-pierce-brown/ Pierce Brown's relentlessly entertaining debut channels the excitement of The Hunger Games by Suzanne Collins and Ender's Game by Orson Scott Card. http://www.risingshadow.net/library?action=book&book_id=41137 Pierce offers a Hollywood-ready story with plenty of action and thrills http://www.publishersweekly.com/978-0-345-53978-6

Pierce Brown is the author of Red Rising, the first installment in a science fiction trilogy. Though Brown was born in Denver, Colorado, his origins are a little more diverse, having called seven states home (Colorado, North Carolina, Arizona, Iowa, Texas, Washington, and California). Now twenty-four, he splits his time between Seattle and Los Angeles. Before becoming a full-time writer, Brown spent time working as an executive aide on a U.S. Senate Campaign, a script runner at ABC, a freelance web producer, and eventually an NBC Page. His degree from Pepperdine University is in Economics and Political Science. You can find him on Twitter @Pierce_Brown and Facebook, or visit his blog: www.pierce-brown.com