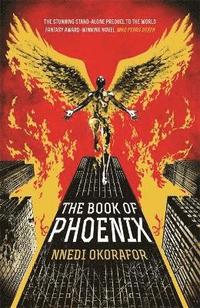 The Book of Phoenix

av Nnedi Okorafor
Häftad Engelska, 2016-02-11
129
Köp
Spara som favorit
Skickas inom 3-6 vardagar.
Fri frakt inom Sverige för privatpersoner.
Finns även som
Visa alla 4 format & utgåvor
'There's more vivid imagination in a page of Nnedi Okorafor's work than in whole volumes of ordinary fantasy epics' Ursula K. LeGuin Prequel to the highly acclaimed, World Fantasy Award-winning novel, Who Fears Death. *** ARTHUR C. CLARKE AWARD FINALIST*** They call her many things - a research project, a test-subject, a specimen. An abomination. But she calls herself Phoenix, an 'accelerated woman' - a genetic experiment grown and raised in Manhattan's famous Tower 7, the only home she has ever known. Although she's only two years old, Phoenix has the body and mind of an adult - and powers beyond imagining. Phoenix is an innocent, happy to live quietly in Tower 7, reading voraciously and basking in the love of Saeed, another biologically altered human. Until the night that Saeed witnesses something so terrible that he takes his own life. Devastated, Phoenix begins to search for answers - only to discover that everything that she has ever known is a lie. Tower 7 isn't a haven. It's a prison. And it's time for Phoenix to spread her wings and rise. Spanning continents and centuries, The Book of Phoenix is an epic, incendiary work of magical realism featuring Nnedi Okorafor's most incredible, unforgettable heroine yet.
Visa hela texten

The Book of Phoenix isn't just well written, and it isn't just smart as hell; it's also a damn good story . . . Original, sharp, thoughtful and evocative * Tor.com * While the grim logic of the plot makes it very clear early on how the plot must play out, the process is as entrancing as watching an avalanche sweep toward you, and Okorafor's prose is as ever, enthralling * RT Reviews * This is a story of vengeance, a fantastic epic battle between good and evil; written as a fable for the future * Barnes & Noble Sci-Fi & Fantasy Blog * The book is grounded by its unflinching exposure of the brutalities of colonialism, racism, and greed, and exalted by the beauty of Okorafor's prose * Library Journal (starred review) * Phoenix and her story exist in that shimmering space that marks where science fiction and magical realism overlap.... The Book of Phoenix hit all of my emotional checkboxes * BookRiot * Okorafor's inventiveness is as stunning as ever, and the ending is nothing short of spectacular * The Chicago Tribune * A gripping examination of the power of myth and of who is allowed to write and preserve history . . . a superlative adventure that addresses all-too-harsh realities * The San Francisco Chronicle * Nnedi Okorafor is one of the most powerful voices in Science Fiction & Fantasy * SFF World * Nnedi Okorafor is a master storyteller * Ngugi wa Thiong'o * Blending poetic passages with sharp observation and the occasional cadence of a story told by firelight, The Book of Phoenix is an assured introduction not just to her world's myths, but to the process of mythmaking * The New York Times * Okorafor's writing is wonderful, and the details of her world-building ... are complex and fascinating * Veronica Roth * Haunting and absolutely brilliant. My heart and guts are all turned inside out * John Green on Who Fears Death * Okorafor's books are fresh, original and smart. We need more writers like her * Patrick Rothfuss, author of The Name of the Wind * Nnedi Okorafor writes glorious futures and fabulous fantasies. Her worlds open your mind to new things, always rooted in the red clay of reality * Neil Gaiman * There's more vivid imagination in a page of Nnedi Okorafor's work than in whole volumes of ordinary fantasy epics * Ursula K. LeGuin * PRAISE FOR NNEDI OKORAFOR:

Bloggat om The Book of Phoenix

Nnedi Okorafor is the author of numerous novels and short stories, including Zahrah the Windseeker, which won the Wole Soyinka Prize for Literature, Who Fears Death, winner of the 2011 World Fantasy Award for Best Novel,and Lagoon, which Ngugi wa Thiong'o, author of Wizard of the Crow, calls 'a thing of magic and beauty.' She lives in New York, where she is a professor of creative writing at the University of Buffalo, SUNY.