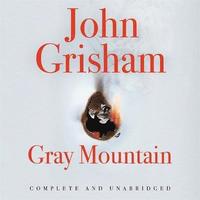 av John Grisham
CD-bok Engelska, 2014-10-23
239
Bevaka
Spara som favorit
Tillfälligt slut – klicka "Bevaka" för att få ett mejl så fort boken går att köpa igen.
Finns även som
Visa alla 1 format & utgåvor
One week ago, Samantha Kofer was a third-year associate at New York City's largest law firm. Now she is an unpaid intern in a legal aid clinic deep in small-town Appalachia. When Lehman Brothers collapsed, she lost her job, her security, her future. As she confronts real clients with real problems, she finds herself a world away from her past life of corporate fat cats and fatter bonuses. This is coal country. Meth country. The law is different here. And standing up for the truth means putting your life on the line. America's greatest storyteller brings us a new masterpiece of legal courage and gripping suspense - and his finest heroine since The Pelican Brief.
Visa hela texten

John Grisham as a child dreamed of being a professional baseball player. After graduating from law school at Ole Miss in 1981, he went on to practice law for nearly a decade, specializing in criminal defense and personal injury litigation. One day, Grisham overheard the harrowing testimony of a twelve-year-old rape victim and was inspired to start a novel exploring what would have happened if the girl's father had murdered her assailants. Getting up at 5 a.m. every day to get in several hours of writing time before heading off to work, Grisham spent three years on A Time to Kill and finished it in 1987. His next novel, The Firm, spent 47 weeks on The New York Times bestseller list and became the bestselling novel of 1991. Since then, he has written one novel a year, including The Client, The Pelican Brief, The Rainmaker and The Runaway Jury. Today, Grisham has written a collection of stories, a work of nonfiction, three sports novels, four kids' books, and many legal thrillers. His work has been translated into 42 languages. He lives near Charlottesville, Virginia.