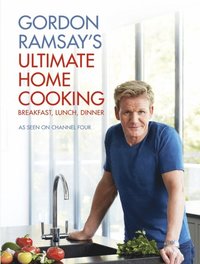 av Gordon Ramsay
E-bok (EPUB - DRM), Engelska, 2013-08-29
10
Den här boken kan endast laddas ned av privatpersoner.
Ladda ned
Spara som favorit
Laddas ned direkt
Läs i vår app för iPhone, iPad och Android
Finns även som
Visa alla 1 format & utgåvor
'My rules are simple. Home cooking has to be easy. It got to be fast. It's got to be delicious. If you think you can't cook amazing food at home, think again. I'm going to prove that however busy you are it's still possible to cook stunning food. These are the only recipes you'll ever need.'GORDON RAMSAY Gordon Ramsay's Ultimate Home Cooking is a collection of over 120 delicious new recipes that are infused with Gordon's expertise and skill gleaned from his years in professional kitchens. Divided into chapters to see you through the whole day from weekday breakfasts through to Saturday night dinners, the book is all about the pleasure of cooking and sharing the very best home-cooked food with family and friends.AS SEEN ON CHANNEL 4
Visa hela texten

Scottish by birth, Gordon was brought up in Stratford-upon-Avon, England. With an injury prematurely putting an end to any hopes of a promising career in football, he went back to college to complete a course in hotel management and his dedication and natural talent led him to train with some of world's leading chefs. In 1993 Gordon became chef of Aubergine in London and within three years was awarded two Michelin stars. In 1998, at the age of 31, Gordon set up his own restaurant, Restaurant Gordon Ramsay, which quickly received the most prestigious accolade in the culinary world - three Michelin stars. One of only four chefs in the UK to maintain three stars, Gordon was awarded an OBE in 2006 for services to the industry. Now internationally renowned, Gordon has opened a string of successful restaurants across the globe, from Italy to LA. 2011 has proved to be another exciting year and saw the opening of Bread Street Kitchen in London's City district, as well as a venture across the pond in Montreal, Canada. Gordon has become a star of the small screen both in the UK and internationally, with two top rated shows in the US. Ramsay's Kitchen Nightmares and Hell's Kitchen are both into their third and ninth series respectively, whilst his latest show, Masterchef US, is now in its second series and is proving to be another massive hit with viewers. Gordon has also published a number of books, many of which have become best sellers across the world, notably his autobiography, Roasting in Hell's Kitchen. Gordon lives with his wife and four children in South London, along with their two bulldogs Rumpole and Romeo.