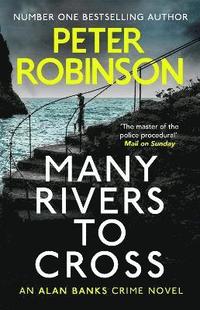 av Peter Robinson
(1 röst)
Häftad Engelska, 2020-05-28
110
Köp
Spara som favorit
Finns även som
Visa alla 4 format & utgåvor
The 26th instalment of the Number One bestselling series 'The master of the police procedural' Mail on Sunday 'The Alan Banks mystery-suspense novels are the best series on the market. Try one and tell me I'm wrong' Stephen King *** A skinny young boy is found dead - his body carelessly stuffed into wheelie bin. Detective Superintendent Alan Banks and his team are called to investigate. Who is the boy, and where did he come from? Was he discarded as rubbish, or left as a warning to someone? He looks Middle Eastern, but no one on the East Side Estate has seen him before. As the local press seize upon an illegal immigrant angle, and the national media the story of another stabbing, the police are called to investigate a less newsworthy death: a middle-aged heroin addict found dead of an overdose in another estate, scheduled for redevelopment. Banks finds the threads of each case seem to be connected to the other, and to the dark side of organised crime in Eastvale. Does another thread link to his friend Zelda, who is facing her own dark side? The truth may be more complex - or much simpler - than it seems . . .
Visa hela texten

Praise for the DCI Banks series * : * Near, perhaps even at the top of, the British crime writers' league. * Times * The Alan Banks mystery-suspense novels are the best series on the market. Try one and tell me I'm wrong. -- Stephen King This is vintage Banks - a dogged search for truth which never once loses its grip on its hero's intuition and charm. * Daily Mail * The master of the police procedural. * Mail on Sunday * Robinson is prolific, but with each book he manages to ring the changes. * Guardian * Banks' slow but dogged pursuit of murderers and his meditations on the past make him a figure readers feel they know intimately and trust implicitly and, despite moments of darkness, the series warmth makes you feel all's right with the world. * S Magazine * Robinson has a unique knack of revealing to the layman the painstaking and ingenious ways in which the numerous experts who work for the police can wheedle out the most infinitesimal clues surrounding a suspicious death * On Yorkshire Magazine * Robinson also has a way of undercutting the genre's familiarity. With a deceptively unspectacular language, he sets about the process of unsettling the reader. * Independent * Banks is up against people tracking, racism, drug dealing and murder, in this unfinchingly tough case. It kicks of with the discovery of a Middle Eastern boy's body stuffed in a wheelie bin and twists and shocks from there * Peterborough Telegraph * Nobody can touch Robinson when it comes to scalpel-sharp police procedurals and Many Rivers to Cross is one of his very best. * Sunderland Echo * Many Rivers To Cross is a well-written and suspenseful crime novel that will be welcomed and read by Peter Robinson's many fans, as well as newcomers to the crime series. * Washington Times * Reliable procedural entertainment from a pro's pro, with an ending that guarantees more drama ahead. * Kirkus Reviews * Many Rivers to Cross is an ultra-modern novel. It covers subjects that are brutal and pitiless, and probably not in the experience of a high percentage of its readers, but are very relevant to today's world and perhaps always have been. Robinson's subject matter for his trilogy is easy to regard as being a million miles from our experience, but nevertheless it exists, and it should not exist. Robinson's exposure in a detective book primarily meant to be read for pleasure is a brave move, but works brilliantly well. We have the horror of being involved in the loathing and bestiality of the crimes, and the joy and satisfaction when at least some of them are cornered and their reign of terror has ended. We pay homage to Banks and to Robinson for having pulled this off, and we sleep easier. I look forward to the final book in this brilliant trilogy. -- Sandra Callard * On: Yorkshire magazine *

Peter Robinson's DCI Banks is a major ITV1 drama starring Stephen Tompkinson (Wild at Heart, Ballykissangel) as Inspector Banks, and Andrea Lowe (The Bill, Murphy's Law) as DI Annie Cabbot. Peter's standalone novel BEFORE THE POISON won the IMBA's 2013 Dilys Award as well as the 2012 Arthur Ellis Award for Best Novel by the Crime Writers of Canada. This was Peter's sixth Arthur Ellis award. His critically acclaimed DCI Banks novels have won numerous awards in Britain, the United States, Canada and Europe, and are published in translation all over the world. In 2020 Peter was made a Grand Master by the Crime Writers of Canada. Peter grew up in Yorkshire, and now divides his time between Richmond and Canada. Peter keeps a website at www.inspectorbanks.com.