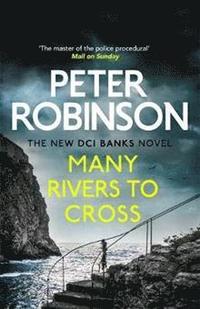 Robinson also has a way of undercutting the genre's familiarity. With a deceptively unspectacular language, he sets about the process of unsettling the reader. * Independent * Robinson has a unique knack of revealing to the layman the painstaking and ingenious ways in which the numerous experts who work for the police can wheedle out the most infinitesimal clues surrounding a suspicious death * On Yorkshire Magazine * Banks' slow but dogged pursuit of murderers and his meditations on the past make him a figure readers feel they know intimately and trust implicitly and, despite moments of darkness, the series warmth makes you feel all's right with the world. * S Magazine * Robinson is prolific, but with each book he manages to ring the changes. * Guardian * The master of the police procedural. * Mail on Sunday * This is vintage Banks - a dogged search for truth which never once loses its grip on its hero's intuition and charm. * Daily Mail * The Alan Banks mystery-suspense novels are the best series on the market. Try one and tell me I'm wrong. -- Stephen King Near, perhaps even at the top of, the British crime writers' league. * Times * Praise for the DCI Banks series * : *

Peter Robinson's DCI Banks is now a major ITV1 drama starring Stephen Tompkinson (Wild at Heart, Ballykissangel) as Inspector Banks, and Andrea Lowe (The Bill, Murphy's Law) as DI Annie Cabbot. Peter's standalone novel BEFORE THE POISON won the IMBA's 2013 Dilys Award as well as the 2012 Arthur Ellis Award for Best Novel by the Crime Writers of Canada. This was Peter's sixth Arthur Ellis award. His critically acclaimed DCI Banks novels have won numerous awards in Britain, the United States, Canada and Europe, and are published in translation all over the world. Peter grew up in Yorkshire, and now divides his time between Richmond and Canada. Peter keeps a website at www.inspectorbanks.com.