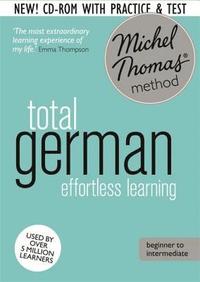 av Michel Thomas
CD-bok Engelska, 2014-05-30
769
Köp
Spara som favorit
Skickas inom 7-10 vardagar.
Gratis frakt inom Sverige över 159 kr för privatpersoner.
Looking for a convenient language course that fits your lifestyle and gets you speaking a new language in a matter of hours? The acclaimed audio-led Michel Thomas Method Total German course, endorsed by celebrities, executives and learners worldwide, will deliver the results you want. How does it work? During the course, you will join Michel and two students in a live lesson, learning from both their successes and their mistakes to keep you motivated and involved throughout the course. You, as the learner, become the third student and participate actively in the class. Within the very first hour you will be able to construct simple phrases by listening and thinking out answers for yourself without the pressure of writing or memorizing. You learn through your own language, so there's no stress, and no anxiety. You'll stick with it because you'll love it. Why is the method so successful? The Michel Thomas Method was perfected over 50 years by celebrated psychologist and linguist Michel Thomas. This unique method works with your brain and draws on the principles of instructional psychology. Knowledge is structured and organised so that you assimilate the language easily and don't forget it. The method breaks down the language into building blocks that are introduced sequentially in such a way that you create your response and move on to ever-more-complex sentences. There is no need to stop for homework, additional exercises or vocabulary memorization, so you progress rapidly. What's in the Course? Total German with the Michel Thomas Method includes up to 8 hours of audio on CD and a practice CD-ROM with interactive activities and assessment which should be done after the course and as a means of review. *Note that the content is the same as the previously entitled Foundation course, but with the addition of a CD-ROM. Learn anywhere Don't be tied to chunky books or your computer, Michel Thomas Method audio courses let you learn whenever you want: at home, in your car, or on the move with your MP3 player. Where do I go next? Perfect German follows on from the Total course with 11 hours of audio and a practice CD-ROM.
Visa hela texten

Michel Thomas (1914-2005) had an amazing life. Born in Poland, he spent his early years in Germany and then in France, where he studied psychology at the Sorbonne in Paris. When war broke out, he fought with the Resistance and suffered imprisonment in labour camps. At the end of the war he joined the US liberation army and later settled in the US where he established his world-famous language school. For more than 50 years he taught languages to the rich and famous and was the world's most sought-after language teacher. After creating several courses of his own, he passed on his method so that other teachers might use it too.