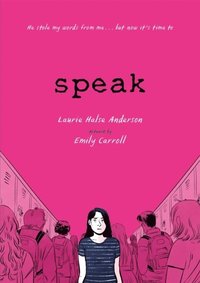 av Laurie Halse Anderson
Häftad Engelska, 2019-08-22
12-15 år
139
Köp
Spara som favorit
Skickas inom 7-10 vardagar.
Gratis frakt inom Sverige över 159 kr för privatpersoner.
Finns även som
Visa alla 1 format & utgåvor
Resonant and fiercely authentic. This timely, critically acclaimed and award-winning modern classic is now a powerful graphic novel. 'I said no.' Melinda is an outcast at Merryweather High. Something happened over the summer - something bad - and now nobody will talk to her, let alone listen. So what's the point in speaking at all? Through her work on an art project, Melinda is finally able to face what really happened that night. But before she can make peace with the ghosts of the past, she has to confront the reality of the present - and stop someone who still wishes to do her harm. Only words can save her. She can't stay silent. Not any more. 'With the rise of women finding their voices and speaking out about sexual assault in the media, this should be on everyone's radar... Powerful, necessary, and essential.' Kirkus
Visa hela texten

This potent retelling of the modern classic Speak blends words and images to create magic: a new representation of a teen whose voice is ripped from her, the battles she must wage to find it again, and the triumph of finally being able to speak out. * School Library Journal starred review * With spellbinding artwork, this exceptional adaptation masterfully does justice to its source material while adding new depth and nuance. * Booklist starred review * Hypnotizing and heart-breaking, with the kind of empowering finish that unshackles protagonist and readers alike. * Shelf Awareness starred review * Anderson's timeless and important tale of high-school sexual assault and its aftermath undergoes a masterful graphic novel transformation... With the rise of women finding their voices and speaking out about sexual assault in the media, this reworking of the enduring 1999 classic should be on everyone's radar... Powerful, necessary, and essential. * Kirkus starred review *

Laurie Halse Anderson (Author) Laurie Halse Anderson is a New York Times-bestselling author, known for tackling tough subjects with humor and sensitivity. Her work has earned numerous awards and accolades. Laurie was the proud recipient of the 2009 Margaret A. Edwards Award given by YALSA division of the American Library Association for her 'significant and lasting contribution to young adult literature'. Mother of four and wife of one, Laurie lives in Northern New York, where she likes to watch the snow fall as she writes. She and her husband, Scot, plus dogs Kezzie and Thor, and assorted chickens and other critters enjoy country living and time in the woods. When not writing or hanging out with her family, you can find Laurie training for marathons or trying to coax tomatoes out of the rocky soil in her backyard. You can follow her adventures on Twitter, http://twitter.com/halseanderson, and on her blog, http://madwomanintheforest.com/blog/. Emily Carroll (Illustrator) Emily Carroll is a Canadian comics author from Ontario. Carroll began her career making short webcomics, and gained recognition with the horror comic His Face All Red. Carroll is the author of Through the Woods, Ann by the Bed and Beneath the Dead Oak Tree. She has won several prestigious awards for her work, including the Eisner and Ignatz.