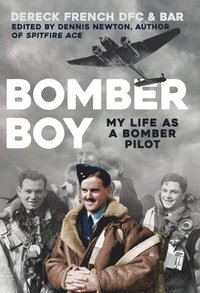 My Life as a Bomber Pilot

av Dereck French, Dennis Newton
Inbunden Engelska, 2020-01-15
219
Köp
Spara som favorit
Skickas inom 5-8 vardagar.
Fri frakt inom Sverige för privatpersoner.
Finns även som
Visa alla 1 format & utgåvor
An extraordinary and forthright character, Dereck French was an original bomber boy and one of those few who managed to survive the war. His battered old suitcase with the label 'D. J. French RAF' was taken on all his trips away from home tied up with a leather belt and sporting a bullet hole. At the beginning he witnessed Britain fighting for its existence and losing - staggering towards seemingly inevitable defeat. He tells of blunders, sacrifices, and rare successes. He saw the struggle to fight back and eventually find a way to win. Dereck was part of it all. Flying Hampdens, he bombed Europe day and night. He bombed in Manchesters too, an aircraft still experimental and pressed into service too soon. Britain was desperate somehow to find a new weapon, a war-winner. It was costly. In Wellingtons, he bombed North Africa as the war at last turned in favour of the Allies. And from India he bombed Burma as the tide of that campaign was changing too. Dereck's words are not inhibited by wartime censorship, nor are they distorted by propaganda. Events are told frankly as they really happened. Aircraft and tactics are described with technical expertise. People are portrayed 'warts and all', as they really were. It was not in Dereck's nature to pull any punches - sometimes to his detriment, attracting the ire of those in charge. He reveals the impact bureaucracy had on the 'front line' airman who bore the brunt of it all.
Visa hela texten

Dereck French served in the RAAF before joining the RAF early in the Second World War. He flew bombing missions on three continents. Flying Hampdens, Manchesters and Wellingtons, he became Australia's first decorated combatant. Dennis Newton is an aviation journalist and author of many books including 'Clash of Eagles', 'Australian Air Aces' & 'First Impact'. He edited the Battle of Britain memoir of Gordon Olive, 'Spitfire Ace', also published by Amberley & serialised in the Daily Mail: 'Ever wonder what it was like to fly a Spitfire in the Battle of Britain? No account captures it quite so nerve shredding as this new book'. He lives in New South Wales, Australia.