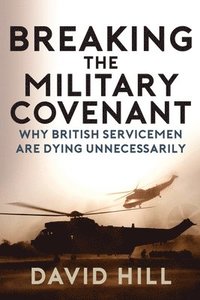 Why British Servicemen Are Dying Unnecessarily

av David Hill
Häftad Engelska, 2019-05-15
179
Köp
Spara som favorit
Skickas inom 5-8 vardagar.
Fri frakt inom Sverige för privatpersoner.
Finns även som
Visa alla 1 format & utgåvor
Who speaks for the dead? Savings at the expense of safety have killed too many British servicemen. This book discusses over one hundred avoidable fatalities that occurred between 1987 and 2016, all linked by maladministration. They include Sea King ASaC Mk7, the Tornado ZG710 / Patriot shootdown, Snatch Land Rovers, the Kajaki Dam minefield incident and Nimrod XV230. Evidence concealed from inquiries and families is revealed for the first time. With the active participation of government, this cover-up protected the guilty. Instead, innocent people were named and shamed. These gross breaches of the Military Covenant made recurrence more likely. Our servicemen deserve better.
Visa hela texten

David Hill is a retired aeronautical engineer, spending much of his career as an avionics/aircraft programme manager in the MoD. He managed over 130 programmes, including RAF Nimrod Electronic Intelligence during Gulf War 1, and the RN Sea King ASaC Mk7 programme. He provided evidence during the Nimrod XV230 and Hercules XV179 Inquests, the former leading directly to the restructuring of MoD's airworthiness system. He produced a report for the bereaved families of the 1994 Chinook crash. He is the author of 'Their Greatest Disgrace: The Campaign to clear the Chinook ZD576 Pilots'.