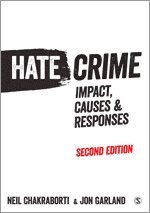 av Neil Chakraborti
Häftad Engelska, 2015-04-01
349
Köp
Spara som favorit
Skickas inom 2-5 vardagar.
Fri frakt inom Sverige för privatpersoner.
Finns även som
Visa alla 2 format & utgåvor
Hate crime is a particularly pernicious form of criminal behaviour that has significant impacts upon victims, their families and wider communities. In this substantially revised and updated edition the book examines the nature, extent and harms of hate crime, and the effectiveness of criminal justice responses to it. It covers racist, religiously motivated, homophobic, disablist and transphobic hate crime, as well as other forms of targeted victimisation such as gendered hostility, elder abuse, attacks upon alternative subcultures and violence against sex workers and the homeless. The book also assesses the complexities and controversies surrounding hate crime legislation and policy-making, as well as the continuing challenges associated with the policing of hate.

The second edition features expanded discussions of international perspectives and contemporary topics such as online hate and cyberbullying, as well as numerous case studies covering issues such as lone wolf extremists, Islamophobia, asylum seekers and the far right. The book contains a range of links to online material that accompany the extensive lists of further reading in each chapter.
Visa hela texten

In this second edition of Hate Crime, Chakraborti and Garland broaden the scope of their analysis to thoughtfully reflect on dramatic changes in the realms of theory, research and policy that have characterized the field in the intervening 6 years since the first edition. They draw attention to our increased awareness of the complexity and ambiguity of hate crime, challenging readers to question many taken for granted assumptions of previous scholarship. This thoroughly researched and accessible text deftly captures the contexts and consequences of hate crime, giving due consideration to both victims and offenders, as well as the relationships between them. What is especially welcome is the weight given to "ways forward." The authors' emphasis on policy innovations within and beyond the UK will undoubtedly shape the scholarly and practical discourses around how we confront hate crime globally.

Comprehensive, informed, full of ideas, and yet accessible. The completely revised and fully updated second edition of this terrific book, by two of the leading scholars in the field, is an absolute must for anyone interested in the field of hate crimes.

The concept of hate crime has been widely debated by academics but there is unlikely to ever be a broad consensus. However, the realities of the harm it causes to individuals and communities are all too real and UK Governments have recognized the value of decisions having a sound academic foundation. Fortunately there are a core group of academics in the UK who have moved on from the conceptual, to focus on its practicalities. Neil Chakraborti and Jon Garland have contributed greatly to this practical wave of research and this updated volume is a useful step forward, addressing some recent emerging elements of policy and practice.

A very useful read for students or practitioners wanting to expand their understanding of this important area. The text is up-to-date, covering such recent developments as the murder of Lee Rigby and the rise of recent far right street movements. The source material encompasses a wide range of international research but also the impressive work of the two central authors who are clearly leaders in the field... I [recommend] this book to all with an interest in the field who would benefit from an extremely competent and illuminating overview.

Neil Chakraborti is a Professor of Criminology at the University of Leicester, Director of the Leicester Centre for Hate Studies and an Adjunct Professor at the University of Ontario. He has published widely within the field of hate crime, and his books include Hate Crime: Impact, Causes and Responses (Sage, 2nd edition 2015; 1st edition 2009 with Jon Garland) Responding to Hate Crime: The Case for Connecting Policy and Research (2014, with Jon Garland); Islamophobia, Victimisation and the Veil (2014 with Irene Zempi); Hate Crime: Concepts, Policy, Future Directions (2010); and Rural Racism (2004 with Jon Garland).

Neil conducts ongoing research in the field of hate studies, and was recently commissioned by the Equality and Human Rights Commission to investigate problems of under-reporting amongst lesbian, gay, bi and trans victims of hate crime. Prior to this he has led a series of funded research projects, including the ESRC-funded Leicester Hate Crime Project and a range of police- and local authority-funded studies of racism, victimisation and targeted hostility. In 2012 he was appointed as a Commissioner on the first-ever inquiry into sex in prisons within England and Wales, established by the Howard League for Penal Reform. He sits on the editorial boards of the British Journal of Criminology and Palgrave Communications, and is Chair of Research on the Board of Trustees for the Howard League for Penal Reform.

Jon Garland is a Reader in Criminology in the Department of Sociology at the University of Surrey. His main areas of research are in the fields of hate crime, rural racism, community and identity, policing and victimisation. He has just finished working on the Leicester Hate Crime Project, a two-year hate crime victimisation study funded by the Economic and Social Research Council. Prior to this he has been awarded research grants from the Home Office (to evaluate police diversity training); Leicester City Council (to conduct an audit of the local African Caribbean community); the European Union (to examine the issue of racism in football); and Greater Manchester Police (to evaluate police diversity training). He has also undertaken a number of projects examining the issue of rural racism, funded by three rural constabularies (Suffolk, Northamptonshire and Warwickshire) and associated partners.