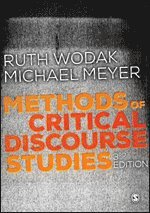 av Ruth Wodak
Häftad Engelska, 2015-10-29
359
Köp
Spara som favorit
Finns även som
Visa alla 2 format & utgåvor
This is a sophisticated and nuanced introduction to critical discourse analysis (CDA) that covers a range of topics in an accessible, engaging style. With international examples and an interdisciplinary approach, readers gain a rich understanding of the many angles into critical discourse analysis, the fundamentals of how analysis works and examples from written texts, online data and images.


Clearly written, practical and rigorous in its approach, this book is the ideal companion when embarking on research that focuses on discourse and meaning-making.
Visa hela texten

This volume offers the most thorough introduction to current methods and areas of application of critical discourse analysis, collecting and representing the work of the leading scholars in the field. This book is a must and an invaluable resource for scholars and students interested in the nexus between discourse, power and society.

This is the best overview of CDS I know. Revised, updated with new topics such as social media, and easier to read. This book is a must for all students of discourse studies.

A classic collection on critical discourse analysis. Bringing together seminal pieces by the leading figures of the field and innovative contributions by younger scholars, this updated and enhanced edition constitutes both an important scholarly achievement and a most valuable teaching resource.

The book is undoubtedly

interplay among discourse, ideology and power.

Michael Meyer is Professor for Business Administration at Vienna University of Economics and Business.