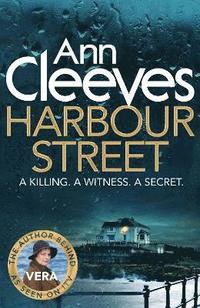 *Winner of the 2017 Crime Writers' Association Diamond Dagger* Harbour Street is the sixth book in Ann Cleeves' Vera Stanhope series - now the major ITV detective drama Vera, starring Brenda Blethyn. A KILLING. In Newcastle, Detective Joe Ashworth and his daughter Jessie travel home on the busy Metro. The train is stopped unexpectedly, and Jessie sees that one woman doesn't leave with the other passengers: Margaret Krukowski has been fatally stabbed. A WITNESS. No one saw the murder take place. How can this be, when the train was packed? Searching for a lead, DI Vera Stanhope heads to the quiet Northumberland town of Mardle to investigate. She can feel in her bones that the local residents know more than they are letting on: a killer is among them. A SECRET. Just days later, a second woman is murdered. Retracing the victims' final steps, Vera finds herself searching deep into the hidden past of this seemingly innocent neighbourhood, led by clues that keep revolving around one street: why are the residents of Harbour Street so reluctant to speak? DI Vera Stanhope is back. And she wants answers. Enjoy more of Vera Stanhope's investigations with The Crow Trap, Telling Tales, Hidden Depths, Silent Voices, The Glass Room, The Moth Catcher, and The Seagull.
Visa hela texten

Millions will be familiar with Brenda Blethyn's portrayal of Vera in the television series of the same name but Cleeves' engaging prose provides a much deeper, subtler insight into an intriguing and likeable character. * Daily Express * If you're a fan of ITV's crime drama Vera, you'll love the books that inspired the series. * S Magazine * Ann Cleeves is a skilful technician, keeping our interest alive and building slowly up to the denouement. Her easy use of language and clever story construction make her one of the best natural writers of detective fiction. * Sunday Express *

Ann Cleeves is the author behind ITV's Vera and BBC One's Shetland. She has written over thirty novels, and is the creator of detectives Vera Stanhope and Jimmy Perez - characters loved both on screen and in print. Her books have now sold over 1 million copies worldwide. Ann worked as a probation officer, bird observatory cook and auxiliary coastguard before she started writing. She is a member of 'Murder Squad', working with other British northern writers to promote crime fiction. In 2006 Ann was awarded the Duncan Lawrie Dagger (CWA Gold Dagger) for Best Crime Novel, for Raven Black. Some of her other novels include the popular Shetland series, Raven Black, White Nights, Red Bones, Blue Lightning, Dead Water and Thin Air. In 2012 she was inducted into the CWA Crime Thriller Awards Hall of Fame. Ann lives in North Tyneside.