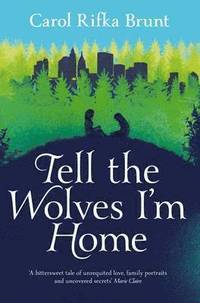 av Carol Rifka Brunt
(8 röster)  |  Läs 2 recensioner
Häftad Engelska, 2013-02-14
109
Köp
Spara som favorit
Finns även som
Visa alla 3 format & utgåvor
There's only one person who has ever truly understood fourteen-year-old June Elbus, and that's her uncle, the renowned painter, Finn Weiss. Shy at school and distant from her once inseparable older sister, June can only be herself in Finn's company; he is her godfather, confident, and best friend. So when he dies far too young of a mysterious illness that June's mother can barely bring herself to discuss, June's world is turned upside down. At the funeral, she notices a strange man lingering just beyond the crowd, and a few days later, June receives a package in the mail. Inside is a beautiful teapot she recognizes from Finn's apartment, and a note from Toby, the stranger, asking for an opportunity to meet. A the two begin to spend time together, June realises she's not the only one who misses Finn, and if she can bring herself to trust this unexpected friend, he might just be the one she needs the most. Tell the Wolves I'm Home is a tender story of love lost and found, an unforgettable portrait of the way compassion can make us whole again.
Visa hela texten

"Tell the Wolves I'm Home" was named one of the "Wall Street Journal"'s Top 10 Novels of 2012, one of Oprah.com's Best Books of 2012, one of "Kirkus Reviews"' top 100 books of the year, and one of "Booklist"'s Top 10 First Novels of 2012 as well as a 2012 "O Magazine" Favorite Read. It is also a Goodreads Choice Awards Finalist for Fiction and a Shelf Awareness Reviewer's Choice pick for 2012."A dazzling debut novel." - "O Magazine""Tremendously moving...Brunt strikes a difficult balance, imbuing June with the disarming candor of a child and the melancholy wisdom of a heart-scarred adult."--"The Wall Street Journal""In this lovely debut novel set in the 1980s, Carol Rifka Brunt takes us under the skin and inside the tumultuous heart of June Elbus...Distracted parents, tussling adolescents, the awful ghost-world of the AIDS-afflicted before AZT--all of it springs to life in Brunt's touching and ultimately hopeful book."--"People""[A] transcendent debut... Peopled by characters who will live in readers' imaginations long after the final page is turned, Brunt's novel is a beautifully bittersweet mix of heartbreak and hope."--"Booklist" (starred review)"Carol Rifka Brunt's astonishing first novel is so good, there's no need to grade on a curve: "Tell the Wolves I'm Home" is not only one of the best debuts of 2012, it's one of the best books of the year, plain and simple. In a literary landscape overflowing with coming-of-age stories, "Tell the Wolves I'm Home" rises above the rest. The narrative is as tender and raw as an exposed nerve, pulsing with the sharpest agonies and ecstasies of the human condition."--Bookpage "A poignant debut...Brunt's first novel elegantly pictures the New York art world of the 1980s, suburban Westchester and the isolation of AIDS."-"-Kirkus" "In ["Tell the Wolves I'm Home"], 15-year-old June must come to terms with the death of her beloved uncle Finn, an artist, from AIDS in 1980s New York. ...What beginse

Carol Rifka Brunt's work has appeared in several literary journals. In 2006 she was one of three fiction writers selected for the New Writing Partnership's New Writing Ventures award and in 2007, she received a generous Arts Council grant to write Tell the Wolves I'm Home, her first novel. Originally from New York, she currently lives in Devon with her husband and three children.