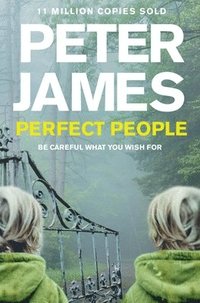 av Peter James
Häftad Engelska, 2012-06-07
113
Köp
Spara som favorit
Finns även som
Visa alla 1 format & utgåvor
Perfect People is a compelling and thought-provoking thriller from bestselling author Peter James. John and Naomi Klaesson are grieving the death of their four-year-old son from a rare genetic disorder. They desperately want another child, but when they find out they are both carriers of a rogue gene, they realize the odds of their next child contracting the disease are high. Then they hear about geneticist Doctor Leo Dettore. He has methods that can spare them the heartache of ever losing another child to any disease - even if his methods cost more than they can afford. His clinic is where their nightmare begins. They should have realized that something was wrong when they saw the list. Choices of eye colour, hair, sporting abilities. They can literally design their child. Now it's too late to turn back. Naomi is pregnant, and already something is badly wrong . . .
Visa hela texten

Peter James was educated at Charterhouse then at film school. He lived in North America for a number of years, working as a screenwriter and film producer before returning to England. His novels, including the Sunday Times Number One bestselling Roy Grace series have been translated into thirty-six languages, with world sales of sixteen million copies, and three have been filmed. In addition to his popular Roy Grace series, Peter has also written a short story collection, A Twist of the Knife, and several standalone titles, including The House on Cold Hill, The Perfect Murder, Atom Bomb Angel and Billionaire. All his novels reflect his deep interest in the world of the police, with whom he does in-depth research, as well as science, medicine and the paranormal. He has also produced numerous films, including The Merchant of Venice, starring Al Pacino, Jeremy Irons and Joseph Fiennes. He divides his time between his homes in Notting Hill, London and near Brighton in Sussex.