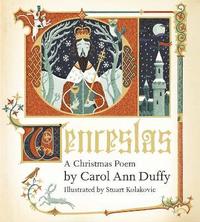 av Carol Ann Duffy Dbe
Inbunden Engelska, 2012-10-25
89
Köp
Spara som favorit
Beginning with the King's Cook, who is preparing a sumptuous Christmas Pie, Wenceslas takes us to a medieval feast. The lords and ladies are at their places, the wine is in full flow, the musicians are playing in the gallery and the entertainment has begun. All should be perfect. But when the good King looks up from his table he sees something more than just snow, falling deep and crisp and even . . . Richly illustrated by Stuart Kolakovic, this gorgeous little book captures the age-old magic of Christmas. In reimagining the much-loved carol of King Wenceslas, Carol Ann Duffy's wonderful poem offers merriment and festive cheer, but also celebrates what is truly important at this special time of year: the simple acts of kindness that each of us can show another.
Visa hela texten

Carol Ann Duffy lives in Manchester, where she is Professor and Creative Director of the Writing School at Manchester Metropolitan University. She has written for both children and adults, and her poetry has received many awards, including the Signal Prize for Children's Verse, the Whitbread, Forward and T. S. Eliot Prizes, the PEN Pinter Prize, and the Lannan and E. M. Forster Prize in America. Her other beautifully illustrated Christmas poems include Another Night Before Christmas, Mrs Scrooge, The Christmas Truce, Bethlehem, Dorothy Wordsworth's Christmas Birthday, and The Wren-Boys. She was appointed Poet Laureate in 2009. Her collections include The World's Wife, Love Poems, Rapture and The Bees which won the Costa Poetry Award.