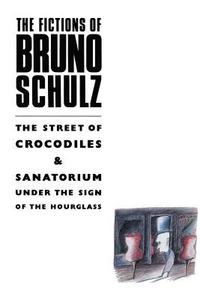 The Fictions of Bruno Schulz: The Street of Crocodiles &; Sanatorium Under the Sign of the Hourglass

The Street of Crocodiles & Sanatorium Under the Sign of the Hourglass

av Bruno Schulz
Häftad Engelska, 2012-01-05
199
Köp
Spara som favorit
The stories in these pages comprise all the surviving fiction of a man described by John Updike in the introduction as 'one of the great transmogrifiers of the world into words'. They portray the doom-ridden yet comic world of a small Polish town in the years before the war, a world brought vividly to life in prose as memorable and as unique as are the brushstrokes of Marc Chagall.
Visa hela texten

'Bruno Schulz was a writer of real, imaginative vision. Like Kafka. Like William Blake. Like all those dreams we have not yet dreamed, but will' Robert Nye 'Schulz's pages are crowded with verbal art which strikes the reader - stuns him, even - with its overload of beauty' Sunday Times

Bruno Schulz was born in 1892. He lived in Drohobycz, Galicia, where he taught art at a secondary school, and drew and wrote in his spare time. In 1934 he published a collection of stories, Cinnamon Shops, followed by another, Sanatorium Under the Sign of the Hourglass, three years later. During the Second World War, he was confined to the ghetto in Drohobycz. One day in 1942, he ventured to the 'Aryan' quarter, where he was recognized by a Gestapo officer and shot dead in the street.