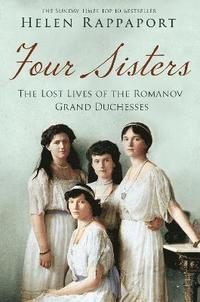 Four Sisters: The Lost Lives of the Romanov Grand Duchesses

The Vanished World of the Romanov D

av Helen Rappaport
Häftad Engelska, 2015-01-29
166
Köp
Spara som favorit
On 17 July 1918, four young women walked down into the cellar of a house in Ekaterinburg. The eldest was twenty-two, the youngest only seventeen. Together with their parents and their thirteen-year-old brother, they were all brutally murdered. Their crime: to be the daughters of the last Tsar and Tsaritsa of All the Russias. In Four Sisters acclaimed biographer Helen Rappaport offers readers the most authoritative account yet of the Grand Duchesses Olga, Tatiana, Maria and Anastasia. Drawing on their own letters and diaries, she paints a vivid picture of their lives in the dying days of the Romanov dynasty. We see, almost for the first time, their journey from a childhood of enormous privilege, throughout which they led a very sheltered and largely simple life, to young womanhood - their first romantic crushes, their hopes and dreams, the difficulty of coping with a mother who was a chronic invalid and a haemophiliac brother, and, latterly, the trauma of the revolution and its terrible consequences. Compellingly readable, meticulously researched and deeply moving, Four Sisters gives these young women a voice, and allows their story to resonate for readers almost a century after their death. 'An astoundingly intimate tale of domestic life lived in the crucible of power' - Observer
Visa hela texten

Rappaport is insightful in her analysis of Alexandra's vulnerability [and] illuminates the precise influence of Grigori Rasputin . . . An astoundingly intimate tale of domestic life lived in the crucible of power. * Observer * [Rappaport] brings to Four Sisters an encyclopedic knowledge of the minutiae of Nicholas and Alexandra's family life . . . Four Sisters is a study in unity. It demonstrates resoundingly the strength of family ties. * The Telegraph * A well-written gem . . . a fascinating, in-depth and comprehensively researched study of the imperial daughters. * Daily Express * Evocative and beautifully researched and told, this is narrative history at its best. * Bookseller * Poignant [and] well written ... Rappaport's sensitive portrayal of the doomed sisters draws the reader into an attachment to each one. * Mail on Sunday * One of the greatest skills a historian can possess is to make readers feel as if they have stepped back in time to witness the characters, places and events they describe. In her stunning composite biography, Helen Rappaport achieves this to dazzling and, at times, almost unbearably poignant effect. -- Tracy Borman * BBC History Magazine *

Helen Rappaport is a historian with a specialism in the nineteenth century. She is the author of numerous books, including Four Sisters, Ekaterinburg: The Last Days of the Romanovs and Magnificent Obsession: Victoria, Albert and the Death that Changed the Monarchy. She is also the author, with Roger Watson, of Capturing the Light.