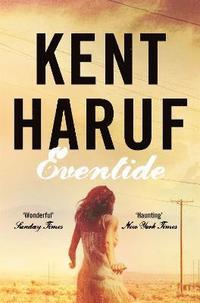 av Kent Haruf
Häftad Engelska, 2013-04-11
106
Köp
Spara som favorit
Finns även som
Visa alla 3 format & utgåvor
Following the astonishing Plainsong, Eventide is Kent Haruf's second novel set in his imaginary landscape of Holt, Colorado. Harold and Raymond McPheron are finally waving goodbye to their beloved Victoria, a young mother with a first chance at an education. Betty and Luther Wallace are struggling to keep their heads above water and their children out of care, and in the same town young friends Dena and DJ find solace away from their own troubled homes. As these stories unfold and entwine, tragedy strikes the McPheron household and life is thrown irrevocably off course. Heart-breaking yet hopeful, Kent Haruf's Eventide is an unflinching depiction of the hardships of small-town life, lit up by astonishing moments of redemption.
Visa hela texten

Possesses the haunting appeal of music, the folksy rhythms of an American tale and the lovely, measured grace of an old hymn. -- Michiko Kakutani * New York Times * Wonderful . . . peopled with individuals whose ordinary lives are invested with epic quality and truth. -- Niall Williams * Sunday Times * This is a novel that succeeds in affirming life without ducking its hardships. * Mail on Sunday * Two taciturn bachelor brothers, a dim-bulb couple living in a trailer, a quiet preteen boy living with his grandfather, a social worker, and a young mother abandoned by her husband . . . The plain truth is you can't stop reading or caring about them. * Boston Globe * Haruf's laconic style - with nouns as strong and upright as fenceposts, the verbs as clean and sharp as razor wire - creates a richly symphonic effect . . . In creating a place whose people are tethered to each other by history and emotion as much as place, Haruf's work is now competing with Faulkner's Mississippi. * Chicago Sun-Times * Luminous . . . Haruf's uncanny ability to stay out of his characters' way is evident again in Eventide. What comes out of their mouths, whether it is kind, mean, ignorant, confused, intelligent or clouded by loneliness, is true and hard, spare as life on the plains . . . Eventide depicts a time, a place and its people so sincerely and so compellingly, with moments of such rare beauty, that the reader cannot walk away. * Colorado Springs Independent * Melancholy truths set to gorgeous melody . . . Haruf sings the second verse of his moving hymn to life on America's great plains. * Kirkus * Haruf makes us care about these plain-spoken, small-town folks without ever resorting to sentimentality or cliches. Instead, he uses their language to capture the mood and mores of the town . . . His story possesses the haunting appeal of music, the folksy rhythms of an American ballad and the lovely, measured grace of an old hymn. * New York Times * Highly charged and compassionate . . . Every action in Holt casts a long shadow, and the gist of Haruf 's story is what happens when those shadows touch. The results are equal parts grace and calamity . . . slow, deliberate, highly charged. * New Yorker * This novelist writes with such unabashed wonder before life's mysteries, such compassion for frail humanity that he seems to have issued from another time, a better place. * Newsday * Haruf 's follow-up to the critically acclaimed and bestselling Plainsong is as lovely and accomplished as its predecessor . . . And while there is much sadness and hardship in this portrait of a community, Haruf 's sympathy for his characters, no matter how flawed they are, make this an uncommonly rich novel. * Publishers Weekly * Eventide is imbued with an unspoken affection that transforms the commonplace into specific, intimate and moving reality. * Times Literary Supplement * A kind book in a cruel world . . . Honest impulses, real people and the occasional workings of grace. * Washington Post * Haruf's fiction, though emotionally rich, is delivered in surprisingly naked language; it is delicate and meticulous, but unembellished. The author fades out of view, becoming not the reporter speaking to the camera, but the invisible operator behind the lens. We are left alone in the world of Holt, watching and listening to the small warm hum of daily life, unable to tear ourselves away until the hidden cameraman stops the film and we step out, blinking, into the cold light of day. * Waterstone's Books Quarterly *

Kent Haruf's honours include a Whiting Foundation Award and a special citation from the PEN/Hemingway Foundation. Plainsong won the Mountains & Plains Booksellers Award and was a finalist for the National Book Award, the Los Angeles Times Book Prize, and the New Yorker Book Award. Benediction was shortlisted for the Folio Prize. He died in November 2014, at the age of seventy-one.