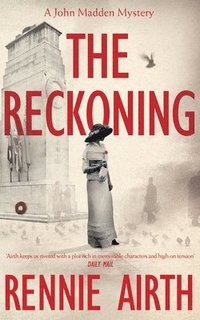 av Rennie Airth
(3 röster)  |  Läs 1 recension
Häftad Engelska, 2015-11-19
183
Köp
Spara som favorit
Finns även som
Visa alla 1 format & utgåvor
The Reckoning is a stunning, atmospheric crime novel teeming with twists and moving between the 1940s, the First and Second World Wars. The Second World War has ended, leaving a bruised and fragile peace. But this tranquillity is threatened when a shocking murder takes place in the Sussex countryside. Before long, police experts discover a link to another, earlier, killing hundreds of miles away . . . While Scotland Yard detective Billy Styles struggles to find a link between these two murders, a strange twist of fate brings former Detective Inspector John Madden into the investigations. As the victim count rises it becomes clear that to catch this serial killer Madden, Styles and young policewoman Detective-Constable Lily Poole must act quickly. But Madden remains haunted by the mysteries at the heart of the case. Why was his name in a letter the second target had been penning, just before he died? Could the real clue to these perplexing murders lie within the victims' pasts? And within his own? Rennie Airth, the author of River of Darkness, The Blood-Dimmed Tide and The Dead of Winter presents his greatest and most compelling novel yet.
Visa hela texten

Memories of a terrible injustice come back to haunt John Madden, a retired police inspector who maintains a semidetached relationship with Scotland Yard. Though the story begins in the aftermath of World War II, it is an event from the earlier European conflict that sparks off a succession of murders. Madden gets involved when his name appears in a letter left by the first victim. It takes a rise in the body count for him to make the connection with a court martial in which he had defended, unsuccessfully, a soldier accused of desertion . . . Rennie Airth keeps us riveted with a plot rich in memorable characters and high on tension. * Daily Mail * Most crime novels offer a curious kind of escape, to places that jag the nerves and worry the mind. Their rides of suspense give a good thrill, but it's rarely a comfortable one. If it's cosy detection we're after, we usually look to the past . . . Rennie Airth, with his series of John Madden mysteries, provides a middle way, and one that in many ways feels altogether nobler . . . In his pursuit of the truth Madden is no charismatic crime-cracker or daring avenger of wrongs. Instead he is a compatriot of such understated sleuths as Susan Hill's artistic Simon Serrailler, or of Adam Dalgliesh, P.D. James's quietly insightful and intensely private gentleman detective. T although convincing, is rarely difficult to penetrate, and the killer's identity never seems designed to shock. Yet all of this matters less than it might, thanks to the potent redrawing of a time that we would do well to remember. The London Airth gives us is mightily damaged, but it still functions, much like the dispirited people who populate it. And that includes Madden and his quarry - the war has not properly ended for either of them, a truth they have each found a way of dealing with, albeit to markedly different ends. The Reckoning may leave nerves unshredded, but there's no cosy resolution. It perturbs far less through a murderer's riddle than through its retelling of a fundamentally broken past. Even as he read Agatha Christie, Dylan Thomas was well aware of 'the darkness in the weather of the eye'. A century on from the outbreak of war, Rennie Airth has provided a timely shake for any comfortably reclining shoulders. * Spectator * Compassion defines Airth's memorable novels, as much as any other aspect of his work . . . Like the previous books in this almost too beautifully written series, The Reckoning is about the comforts of redemption and forgiveness - and the impossibility of forgetting. * New York Times * Another John Madden mystery (I am a huge fan of these) and yet another atmospheric, beautifully set and terrifically written "old school" mystery from Rennie Airth . . . These novels have such a gentle, beautiful flow to them, putting you right into that time and place without effort, a time when the country was mending itself after a horrific war, rationing was still in place and things were difficult all round. There is a definite Christie style and ambience to these stories which for me makes them all the better, especially as I am a huge fan of those ageless tales. Plot development is always perfectly paced, the characters are all terrifically well drawn. Overall another fantastic read and I really can't wait for the next. * lizlovesbooks blog * The Reckoning has been carefully constructed to lull the reader into thinking they're in familiar territory. The well written, short sentences move the story along at a great pace, along with engaging characters, cracking dialogue and vivid descriptions that capture the feel of the time. Real life events from both World Wars are seamlessly woven into the narrative to powerful effect, inviting empathy for characters caught in the crossfire of war. As the thick fog of misdirection lifts the reader is left in no doubt of the real life crime that lies at the heart of this devastating novel. The desire for revenge can blind those who seek it, changing

Rennie Airth was born in South Africa and has worked as a foreign correspondent for Reuters. The first novel in his John Madden series, River of Darkness, was published in 1999 to huge critical acclaim, was shortlisted for four crime fiction awards and won the Grand Prix de Litterature Policiere in France. River of Darkness was followed by The Blood-Dimmed Tide, the CWA Ellis Peters Award shortlisted The Dead of Winter and now The Reckoning.