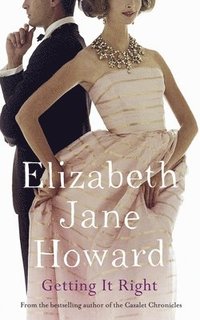 av Elizabeth Jane Howard
Häftad Engelska, 2015-09-10
219
Köp
Spara som favorit
Skickas inom 10-15 vardagar.
Gratis frakt inom Sverige över 159 kr för privatpersoner.
Finns även som
Visa alla 1 format & utgåvor
Winner of the Yorkshire Post Novel of the Year Award. From the bestselling author of the Cazalet Chronicles comes Elizabeth Jane Howard's Getting It Right, a touching comedy about a young man trying desperately to get it right. Gavin - a sensitive, shy, hairdresser in the West End - is, at thirty-one, still a virgin. He's a classic late developer, and he's worried that it's getting too late to develop at all. Then one night, Gavin finds himself at a penthouse party and meets people the likes of which he's never come across before. Suddenly, everything begins to change . . . Over the next fortnight, Gavin might start, at last, to 'get it right'.
Visa hela texten

Elizabeth Jane Howard was the author of fifteen highly acclaimed novels. The Cazalet Chronicles - The Light Years, Marking Time, Confusion, Casting Off and All Change - have become established as modern classics and have been adapted for a major BBC television series and for BBC Radio 4. In 2002 Macmillan published Elizabeth Jane Howard's autobiography, Slipstream. In that same year she was awarded a CBE in the Queen's Birthday Honours List. She died, aged ninety, at home in Suffolk on 2 January 2014.