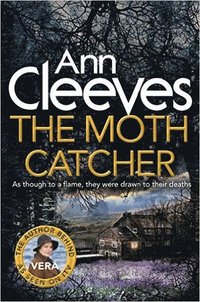 *Winner of the 2017 Crime Writers' Association Diamond Dagger* The Moth Catcher is the seventh book in Ann Cleeves' Vera Stanhope series - now the major ITV detective drama Vera, starring Brenda Blethyn. 'This case was different from anything Vera had ever worked before. Two bodies, connected but not lying together. And nothing made her feel as alive as murder.' Life seems perfect in Valley Farm, a quiet community in Northumberland. Then a shocking discovery shatters the silence. The owners of a big country house have employed a house-sitter, a young ecologist named Patrick, to look after the place while they're away. But Patrick is found dead by the side of the lane into the valley - a beautiful, lonely place to die. DI Vera Stanhope arrives on the scene, with her detectives Holly and Joe. When they look round the attic of the big house - where Patrick has a flat - she finds the body of a second man. All the two victims have in common is a fascination with moths - catching these beautiful, rare creatures. Those who live in the Valley Farm development have secrets too: Annie and Sam's daughter is due to be released from prison any day; Nigel watches, silently, every day, from his window. As Vera is drawn into the claustrophobic world of this increasingly strange community, she realizes that there may be deadly secrets trapped here . . . Enjoy more of Vera Stanhope's investigations with The Crow Trap, Telling Tales, Hidden Depths, Silent Voices, The Glass Room, Harbour Street, and The Seagull.
Visa hela texten

Millions will be familiar with Brenda Blethyn's portrayal of Vera in the television series of the same name but Cleeves' engaging prose provides a much deeper, subtler insight into an intriguing and likeable character. * Daily Express * Cleeves is quietly carving out a reputation as the new Queen of Crime. * Sunday Mirror * If you're a fan of ITV's crime drama Vera, you'll love the books that inspired the series. * S Magazine * Ann Cleeves is a skilful technician, keeping our interest alive and building slowly up to the denouement. Her easy use of language and clever story construction make her one of the best natural writers of detective fiction. * Sunday Express *

Ann Cleeves is the author behind ITV's Vera and BBC One's Shetland. She has written over twenty-five novels, and is the creator of detectives Vera Stanhope and Jimmy Perez - characters loved both on screen and in print. Her books have now sold over 1 million copies worldwide. Ann worked as a probation officer, bird observatory cook and auxiliary coastguard before she started writing. She is a member of 'Murder Squad', working with other British northern writers to promote crime fiction. In 2006 Ann was awarded the Duncan Lawrie Dagger (CWA Gold Dagger) for Best Crime Novel, for Raven Black. Some of her other novels include the popular Shetland series, Raven Black, White Nights, Red Bones, Blue Lightning, Dead Water and Thin Air. In 2012 she was inducted into the CWA Crime Thriller Awards Hall of Fame. Ann lives in North Tyneside.