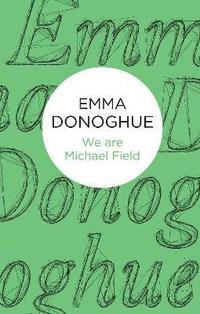 We are Michael Field

av Emma Donoghue
Inbunden Engelska, 2014-08-28
259
Köp
Spara som favorit
Skickas inom 10-15 vardagar.
Gratis frakt inom Sverige över 159 kr för privatpersoner.
Finns även som
Visa alla 1 format & utgåvor
In this profile, Emma Donoghue tells the story of two eccentric Victorian spinsters: Katherine Bradley (1846-1914) and her niece Edith Cooper (1862-1913); poets and lovers, who wrote together under the name of Michael Field. They wrote eleven volumes of poetry and thirty historical tragedies, but perhaps their best work - richest in emotional honesty and wit - was the diary that the two women shared for a quarter of a century, and these unpublished journals and letters form the basis for the groundbreaking We are Michael Field. The Michaels lived in a contradictory world of inherited wealth and terrible illness, silly nicknames and religious crises. They preferred men to women, and yet their greatest devotion was saved for their dog. Snobbish, arrogant eccentrics who faced bereavement and death with great courage, the Michaels never lost their appetite for life or their passion for each other.
Visa hela texten

Born in Dublin in 1969, Emma Donoghue is an Irish emigrant twice over: she spent eight years in Cambridge, England, before moving to Canada's London, Ontario. She is best known for her novels, which range from the historical (The Wonder, Slammerkin, Life Mask, The Sealed Letter) to the contemporary (Akin, Stir-Fry, Hood, Landing). Her international bestseller Room was a New York Times Best Book of 2010 and was a finalist for the Man Booker, Commonwealth, and Orange Prizes; her screen adaptation, directed by Lenny Abrahamson, was nominated for four Academy Awards.