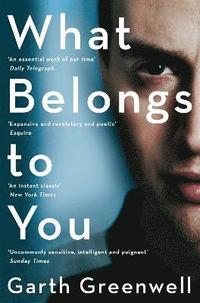 What Belongs to You

av Garth Greenwell
Häftad Engelska, 2017-03-23
109
Köp
Spara som favorit
Skickas inom 10-15 vardagar.
Fri frakt inom Sverige över 159 kr för privatpersoner.
Finns även som
Visa alla 3 format & utgåvor
Winner of the Debut of the Year Award at the British Book Awards. Shortlisted for the James Tait Black Prize. On an unseasonably warm autumn day, an American teacher enters a public bathroom beneath Sofia's National Palace of Culture. There he meets Mitko, a charismatic young hustler, and pays him for sex. He returns to Mitko again and again over the next few months, their relationship growing increasingly intimate and unnerving. As he struggles to reconcile his longing with the anguish it creates, he's forced to grapple with his own fraught history: his formative experiences of love, his painful rejection by family and friends, and the difficulty of growing up as a gay man in southern America in the 1990s. Startlingly erotic and immensely powerful, Garth Greenwell's What Belongs to You tells an unforgettable story about the ways our pasts and cultures, our scars and shames can shape who we are and determine how we love. Longlisted for the National Book Award in Fiction. A Finalist for the PEN/Faulkner Award for Fiction. A Finalist for the Los Angeles Times Book Prize for Fiction.
Visa hela texten

A spare, spellbinding account . . . written in gorgeously limpid prose . . . fearless and nerve-racking autobiographical fiction, incandescent with yearning, rage and rejection . . . one of the most heartbreaking accounts of pained desire that I can remember reading . . . worthy of its comparisons to James Baldwin and Alan Hollinghurst as well as Virginia Woolf and WG Sebald -- Johanna Thomas-Corr, <i>Observer</i> Garth Greenwell's book has the power and infinite beauty of an ancient tragedy: on every page, passion, obsession, and the struggle for freedom collide with the inevitability of fate and the violence of society. At the same time, it's a radically contemporary novel, which overwhelmed me as much with its language - rhythmic, incantatory, visceral - as with the way it takes the subjects of memory, escape, desire, and melancholy, and makes them new. What Belongs to You is an essential book. -- Edouard Louis The book I wish I'd written? Garth Greenwell's What Belongs to You. It does in its few perfect pages everything - absolutely everything - that I aspire to do with words. -- Taiye Selasi * Guardian * I read this book when it first emerged and I will keep reading it every year of my life. It is a secular desire bible. It is desire alive. -- Lidia Yuknavitch * The Millions * I sat down to read a chapter of What Belongs to You one afternoon and ended up reading the whole thing in one sitting, hunched over my kitchen table until dark. Garth Greenwell's devastatingly beautiful novel about a gay American expat in Bulgaria and his on-again, off-again relationship with a sex worker named Mitko has been one of the year's breakout hits, and for good reason. It's a virtuosic, tender exploration of loneliness and desire, with sentences so breathtaking you'll find yourself returning to them over and over again * NPR * An astonishing portrait of compromised lust, set in ex-Soviet Sofia, this debut novel holds its own against classics such as Lolita * Telegraph * What Belongs To You is an exquisite triptych * Vulture * The literary sensation . . . a brilliant tale of gay desire and class division that is exquisitely phrased * i * I devoured it, in a single sitting . . . I was completely spellbound by it . . . What Belongs To You is concentrated brilliance, a short novel that packs an emotive and thought provoking punch. I urge you all to read it * Savidge Reads * Beautifully written . . . a galvanising read as Greenwell constantly dissects his own feelings, thoughts and motives, sieving through desire and need with intelligence, insight and candour . . . Greenwell pulls off a mesmeric read . . . a finely wrought and compelling artifact of both beauty and truth. * New Zealand Listener * Absolutely astonishing . . . a tour de force . . . remarkable -- Christopher Frayling * Saturday Review, BBC Radio 4 * I was blown away by it . . . beautiful -- Helen Lewis * Saturday Review, BBC Radio 4 * Beautifully rendered, quietly obsessive. A Sebaldian account of a gay American in Sofia, Bulgaria, and the bruising experience of his sexuality being revealed to his father when he was younger -- Adam Haslett, author of <i>Imagine Me Gone</i> What Belongs To You is a short novel, but Garth Greenwell's sentences are expansive and revelatory and poetic. Greenwell juxtaposes the narrator's experiences in an unprogressive, formerly Communist country still recovering its infrastructure, to the narrator's own childhood, growing up gay and closeted in the oppressive American South . . . a lovely meditation on fear and acceptance, desire and oppression, and the disparity between two cultures * Esquire * I am in awe of this book. So intimate, so honest, so exquisitely crafted, it broke my heart and left me in tears. It showed me a Bulgaria both familiar and entirely novel, rendered with candor and deep affection, and characters, whose plight and desires at first seemed foreign yet, before long, so dear. Garth Greenwell has written a m

Bloggat om What Belongs to You

Garth Greenwell is a graduate of the University of Iowa Writer's Workshop, where he was an Arts Fellow. His novella Mitko won the 2010 Miami University Press Novella Prize and was a finalist for the Edmund White Award for Debut Fiction and a Lambda Literary Award.