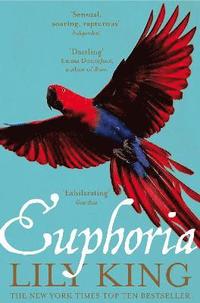 av Lily King
Häftad Engelska, 2015-09-24
129
Köp
Spara som favorit
Finns även som
Visa alla 4 format & utgåvor
The New York Times Top Ten Bestseller From the author of Writers & Lovers, Euphoria is Lily King's gripping novel inspired by the true story of a woman who changed the way we understand our world. 'Pretty much perfect' - Curtis Sittenfeld, author of Rodham In 1933 three young, gifted anthropologists are thrown together in the jungle of New Guinea. They are Nell Stone, fascinating, magnetic and famous for her controversial work studying South Pacific tribes, her intelligent and aggressive husband Fen, and Andrew Bankson, who stumbles into the lives of this strange couple and becomes totally enthralled. Within months the trio are producing their best ever work, but soon a firestorm of fierce love and jealousy begins to burn out of control, threatening their bonds, their careers, and, ultimately, their lives . . . 'Dazzling' - Emma Donoghue, author of Room 'Taut, witty, fiercely intelligent . . . Exquisite' - New York Times
Visa hela texten

Pretty much perfect. It's a novel about a Margaret Mead-like character in New Guinea in the 30s, and it's so smart and rich and alive. -- Curtis Sittenfeld, author of AMERICAN WIFE, Best Books of 2014 This dazzling novel bites like a tropical insect, and makes anthropology seem more exciting than any other profession -- Emma Donogue, author of ROOM A brilliant reimagining of Mead's pioneering exploits . . . the artfulness of her characterisation is so adept that her prose has the force of truth. * Daily Telegraph * Jaw-droppingly, heart-stoppingly beautiful -- Paula McLain, author of THE PARIS WIFE A taut, witty, fiercely intelligent tale of competing egos and desires in a landscape of exotic menace . . . Exquisite * New York Times * Dramatic, insightful and absorbing . . . she captures the amber of one man's exquisite longing for a woman who changed the way we look at ourselves * Washington Post * Persuasive and evocative . . . Finely crafted . . . it shows a talented writer unwilling to settle for what she already does well and eager to give herself new challenges; her ambition is laudable * Los Angeles Times * From Conrad to Kingsolver, the misdeeds of Westerners have inspired their own literary subgenre, and in King's insightful, romantic addition, the work of novelist and anthropologist find resonant parallel: In the beauty and cruelty of others, we discover our own * Vogue * Thrilling . . . intense, seductive, sexual, and intellectual . . . It's grit-in-your-teeth sensuous * San Francisco Chronicle * There are some novels that take you by the hand with their lovely prose alone; there are those that pull you in with sensual renderings of time and place and a compelling story; and there are still others that seduce you solely with their subject matter. But it is a rare novel indeed that does all of the above at once and with complete artistic mastery. Yet this is precisely what Lily King has done . . . Euphoria is simply one of the finest novels I've read in years -- Andre Dubus III, author of HOUSE OF SAND AND FOG I have come to expect Lily King's nuanced explorations of the human heart, but in this novel she pulled me in to the exotic world of a woman anthropologist working with undiscovered tribes in 1930s New Guinea and I was totally captivated -- Karl Marlantes, author of MATTERHORN Dazzling . . . in King's expert hands the three protagonists soon become richly rendered characters, each with her or his own suspenseful narrative . . . an exhilarating novel * Boston Globe * This impeccably researched story illuminates the state of the world as clearly as the passion of its characters . . . a thrilling read that, at its end, does indeed feel like 'the briefest, purest euphoria'' * Publishers Weekly * A small gem, disturbing and haunting * Kirkus * Atmospheric and sensual, with startling images throughout, Euphoria is an intellectually stimulating tour de force -- Jane Ciabattari, author of STEALING THE FIRE Adventure and romance, danger and knowledge, desire and desolation . . . exquisitely braided, they form the core of Euphoria . . . I'm left breathless, excited, ready to wander and explore, a little afraid, enamored, enlightened -- Bill Roorbach, author of LIFE AMONG GIANTS and THE REMEDY FOR LOVE Masterful . . . A great novelist is like an anthropologist, examining what humans do by habit and custom . . . This is a riveting and provocative novel, absolutely first-rate * Seattle Times * Fresh, brilliantly structured, and fully imagined -- Andrea Barrett, author of ARCHANGEL and SHIP FEVER Euphoria is a brilliantly written book and entirely fascinating from start to finish -- Alice Greenway, author of THE BIRD SKINNER King's novel turns an episode in the life of Margaret Mead into a taut tale of competing egos and desires in a landscape of exotic menace -- Notable Books of 2014 * New York Times *

Lily King is the author of the novels The Pleasing Hour, The English Teacher, Father of the Rain, Writers & Lovers, and Euphoria, which is inspired by the life of revolutionary anthropologist Margaret Mead. King is the recipient of a Whiting Writers' Award and has twice won both the Maine Fiction Award and the New England Book Award. She lives with her husband and children in Maine.