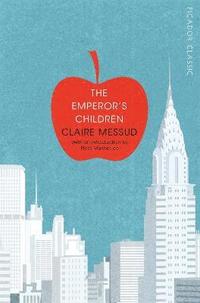 av Claire Messud
(1 röst)
Häftad Engelska, 2015-08-13
127
Köp
Spara som favorit
Skickas inom 7-10 vardagar.
Gratis frakt inom Sverige över 159 kr för privatpersoner.
With an introduction by Neel Mukherjee. In Manhattan, just after the century's turn, three thirty-year-old friends, Danielle, Marina and Julius, are seeking their fortunes. But the arrival of Marina's young cousin Bootie - fresh from the provinces and keen, too, to make his mark - forces them to confront their own desires and expectations. The Emperor's Children by Claire Messud is an American classic: a sweeping portrait of one of the most fascinating cities in the world, and a haunting illustration of how the events of a single day can change everything, for ever.
Visa hela texten

In its scope, style and substance, The Emperor's Children is an attempt to return the novel to its golden age; it is engaged in a conversation with George Eliot, Henry James, Dostoevsky. Its psychological realism is perfect, its characters . . . thrillingly real, alive and utterly convincing in their subtleties of thought and the ticking of their minds. Messud's prose is a timely and intensely pleasurable reminder of the possibilities of the English language. To use the word clarity about her style - dense, chaste, luminously intelligent - is to return the word to its origins; this is style as illumination, shining a searching yet sympathetic light on the minds and inner worlds of her characters, and as a radiant mode of moral inquiry. * The Times * From the moment the book opens, one senses a writer of confidence and maturity, expansive, sure of her ground and savouring her own sonorous prose . . . Messud has proved in her previous novels that she is an intelligent and ambitious writer whose fiction is concerned with matters well beyond the personal and domestic . . . There is much to enjoy here, not least Messud's delicate yet devastating use of irony, her nuanced portrayal of character and motive and her vivid descriptions. * Sunday Telegraph * [The Emperor's Children] demonstrates Ms. Messud's growing range as a writer, her ability to shift gears effortlessly between the comic and the tragic, the satiric and the humane . . . Ms. Messud delineates this Manhattan world with quick, sure, painterly strokes, relying less on Tom Wolfeian status details and obviously satiric vignettes than on her psychological radar for how people talk and behave . . . Ms. Messud does a nimble, quicksilver job of portraying her central characters from within and without - showing us their pretensions, frailties and self-delusions, even as she delineates their secret yearnings and fears. At the same time, she uses their stories to explore many of the same questions she explicated so masterfully in The Last Life - questions about how an individual hammers out an identity of his or her own under the umbrella of a powerful family, questions about the ways in which people mythologize their own lives and the lives of those they love. * New York Times * As large-hearted as it is ambitious, this is a novel that combines the old-fashioned art of storytelling with a clear-eyed view of the modern world. * Sunday Times * Messud has captured a moment, and she has captured it brilliantly . . . Messud has written a big book about the gleaming surfaces of life, and what they conceal. Her ambition - positively nineteenth century, I think - is outweighed only by her talent. * Evening Standard * A splendid American novel, contemporary yet historical, with an avalanche of characters flowing across the world from Australia to Manhattan to small-town America and to Florida . . . This is an ambitious, confident, most readable book by a first rate storyteller with the youth and vitality to spread a huge canvas and enjoy filling it. * Spectator * Claire Messud is a novelist of unnerving talent . . . The Emperor's Children is a masterly comedy of manners - an astute and poignant evocation of hobnobbing glitterati in the months before and immediately following September 11 . . . [It] is, on its surface, a stingingly observant novel about the facades of the chattering class - with its loves, ambitions and petty betrayals - but it is also, more profoundly, about a wholesale collision of values . . . The Emperor's Children is full of satirical chiding, but it's one of the most delightful - even delicious - forms of such chiding I've encountered . . . Among its many pleasures, this novel indisputably reminds us of one truth that cannot be declared fungible: the obdurate reality of the human imagination. The Emperor's Children is a penetrating testament to its power. * New York Times Book Review *

Claire Messud was born in the United States in 1966. She was educated at Yale and Cambridge. She is the author of When The World Was Steady, which was a finalist for the PEN/Faulkner Award, The Hunters, The Last Life, which won the Encore Prize, and The Woman Upstairs.