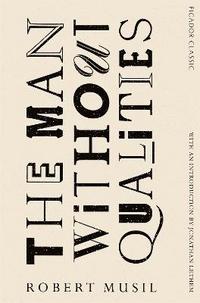 The Man Without Qualities

av Robert Musil
(1 röst)  |  Läs 1 recension
Häftad Engelska, 2017-02-23
201
Köp
Spara som favorit
Kan levereras innan julafton!
Finns även som
Visa alla 1 format & utgåvor
With an introduction by Jonathan Lethem It is 1913, and Viennese high society is determined to find an appropriate way of celebrating the seventieth jubilee of the accession of Emperor Franz Josef. But as the aristocracy tries to salvage something illustrious out of the collapse of the Austro-Hungarian Empire, the ordinary Viennese world is beginning to show signs of more serious rebellion. Caught in the middle of this social labyrinth is Ulrich: youngish, rich, an ex-soldier, seducer and scientist. Unable to deceive himself that the jumble of attributes and values that his world has bestowed on him amounts to anything so innate as a 'character', he is effectively a man 'without qualities', a brilliant, detached observer of the spinning, racing society around him. Part satire, part visionary epic, part intellectual tour de force, The Man Without Qualities by Robert Musil is a work of immeasurable importance.
Visa hela texten

The Man Without Qualities is one of the towering achievements of the European novel * Observer * I would recommend Sophie Wilkins' translation as a conscientious attempt to give to the English reader a novel which is compared to The Remembrance of Things Past and Ulysses * The Times * Immensely rich and therapeutic, bristling with wit and a sly humour * Sunday Telegraph * At last, at last - the fully fleshed arrival in English of the third member of the trinity in twentieth-century fiction, complementing Ulysses and The Remembrance of Things Past . . . This last-waltz novel is amazingly contemporary * Wall Street Journal * There is scarcely a page that does not provoke new thoughts or offer new insights, not a chapter that, even read on its own, does not prove stimulating * Scotsman *

Robert Musil was born in Klagenfurt, Austria, in 1880. Trained in science and philosophy, he left a career in the military to turn to writing. The publication of his novel Young Toerless in 1906 brought him international recognition and remains a classic parable on the misuse of power. After serving in the First World War, Musil lived alternately in Vienna and Berlin, with much of his time being dedicated to the slow writing of his masterwork, The Man Without Qualities. In 1938, when Hitler's rise to power threatened Musil's work with being banned in both Austria and Germany, he emigrated to Switzerland, where he and his wife lived until his death in 1942. The first complete German edition of The Man Without Qualities finally appeared in 1978.