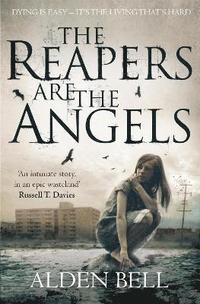 The Reapers are the Angels

av Alden Bell
Häftad Engelska, 2015-04-23
199
Köp
Spara som favorit
Skickas inom 10-15 vardagar.
Fri frakt inom Sverige för privatpersoner.
Finns även som
Visa alla 3 format & utgåvor
God is a slick god. Temple knows. She knows because of all the crackerjack miracles still to be seen on this ruined globe . . . Older than her years and completely alone, Temple is just trying to live one day at a time in a post-apocalyptic world, where the undead roam endlessly, and the remnant of mankind who have survived, at times, seem to retain little humanity themselves. This is the world she was born into. Temple has known nothing else. Her journey takes her to far-flung places, to people struggling to maintain some semblance of civilization - and to those who have created a new world order for themselves. When she comes across the helpless Maury, she attempts to set one thing right, if she can just get him back to his family in Texas then maybe it will bring redemption for some of the terrible things she's done in her past. Because Temple has had to fight to survive, has done things that she's not proud of and, along the road, she's made enemies. Now one vengeful man is determined that, in a world gone mad, killing her is the one thing that makes sense . . .
Visa hela texten

Bloggat om The Reapers are the Angels

Alden Bell lives in New York with his wife, the Edgar-award-winning novelist Megan Abbott. For the past nine years, he has taught high school English at an Upper East Side prep school (a modern orthodox co-educational Yeshiva). Since 2002, he has also taught literature and cultural studies courses as an adjunct professor at the New School. Prior to coming to New York, he grew up in the heart of Orange County: Anaheim, home of Disneyland. He graduated from Berkeley with a degree in English and a minor in creative writing, where his instructors included Bharati Mukherjee, Leonard Michaels and Maxine Hong Kingston. In 2000, he received his Master's and Ph.D. in English at New York University, specializing in twentieth-century American and British literature.