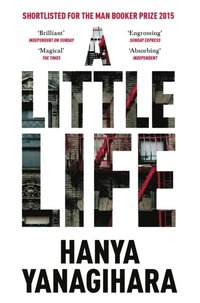 Shortlisted for the Man Booker Prize 2015

av Hanya Yanagihara
(9 röster)  |  Läs 3 recensioner
Häftad Engelska, 2017-03-10
126
Köp
Spara som favorit
Finns i lager! Skickas inom 1-2 vardagar.
Gratis frakt inom Sverige över 159 kr för privatpersoner.
Finns även som
Visa alla 1 format & utgåvor
Shortlisted for the Booker Prize 2015. Shortlisted for the Baileys Prize for Women's Fiction 2016. Finalist for the National Book Awards 2015. The million copy bestseller, A Little Life by Hanya Yanagihara, is an immensely powerful and heartbreaking novel of brotherly love and the limits of human endurance. When four graduates from a small Massachusetts college move to New York to make their way, they're broke, adrift, and buoyed only by their friendship and ambition. There is kind, handsome Willem, an aspiring actor; JB, a quick-witted, sometimes cruel Brooklyn-born painter seeking entry to the art world; Malcolm, a frustrated architect at a prominent firm; and withdrawn, brilliant, enigmatic Jude, who serves as their centre of gravity. Over the decades, their relationships deepen and darken, tinged by addiction, success, and pride. Yet their greatest challenge, each comes to realize, is Jude himself, by midlife a terrifyingly talented litigator yet an increasingly broken man, his mind and body scarred by an unspeakable childhood, and haunted by what he fears is a degree of trauma that he'll not only be unable to overcome - but that will define his life forever.
Visa hela texten

A singularly profound and moving work . . . It's not often that you read a book of this length and find yourself thinking "I wish it was longer" but Yanagihara takes you so deeply into the lives and minds of these characters that you struggle to leave them behind. -- Fiona Wilson * The Times * A Little Life makes for near-hypnotically compelling reading, a vivid, hyperreal portrait of human existence that demands intense emotional investment . . . An astonishing achievement: a novel of grand drama and sentiment, but it's a canvas Yanagihara has painted with delicate, subtle brushstrokes. * Independent * One of the pleasures of fiction is how suddenly a brilliant writer can alter the literary landscape . . . Ms. Yanagihara's immense new book . . . announces her, as decisively as a second work can, as a major American novelist. Here is an epic study of trauma and friendship written with such intelligence and depth of perception that it will be one of the benchmarks against which all other novels that broach those subjects (and they are legion) will be measured. * Wall Street Journal * How often is a novel so deeply disturbing that you might find yourself weeping, and yet so revelatory about human kindness that you might also feel touched by grace? Yanagihara's astonishing and unsettling second novel . . . plumbs the rich inner lives of all of her characters... You don't just care deeply about all these lives. Thanks to the author's exquisite skill, you feel as if you are living them . . . A Little Life is about the unimaginable cruelty of human beings, the savage things done to a child and his lifelong struggle to overcome the damage. Its pages are soaked with grief, but it's also about the bottomless human capacity for love and endurance . . . It's not hyperbole to call this novel a masterwork - if anything that word is simply just too little for it * San Francisco Chronicle * Martin Amis once asked, "Who else but Tolstoy has made happiness really swing on the page?" And the surprising answer is that Hanya Yanagihara has: counterintuitively, the most moving parts of "A Little Life" are not its most brutal but its tenderest ones, moments when Jude receives kindness and support from his friends . . . "A Little Life" feels elemental, irreducible-and, dark and disturbing though it is, there is beauty in it -- Jon Michaud * New Yorker * Hanya Yanagihara's no-holds-barred second novel A Little Life has established her as a major new voice in US fiction. -- Tim Adams * Observer * Utterly compelling . . . quite an extraordinary novel. It is impossible to put down . . . And it is almost impossible to forget. -- Mernie Gilmore * Daily Express * [The] spring's must-read novel . . . Her debut . . . put her on the literary map, her massive new novel . . . signals the arrival of a major new voice in fiction . . . Her achievement has less to do with size than with her powerful evocation of the fragility of self . . . the pained beauty that suffuses this novel, an American epic that eloquently counters our culture's fixation with redemptive narratives. * Vogue US * [A] wholly immersive unforgettable read . . . You won't stop reading. And it's a novel that changes you. * Evening Standard * The triumph of A Little Life's many pages is significant: It wraps us so thoroughly in a character's life that his trauma, his struggles, his griefs come to seem as familiar and inescapable as our own. There's no one way to experience loss, abuse, or the effects of trauma, of course, but the vividness of Jude's character and experiences makes the pain almost tangible, the fall-out more comprehensible. It's a monument of empathy, and that alone makes this novel wondrous * Huffington Post * Often painful but thoroughly brilliant . . . Yanagihara's massive new novel . . . is hurtful. That's because, among other things, it is the enthralling and completely immersive story of one man's unyielding pain. It also asks a compell

Hanya Yanagihara is the author of the internationally bestselling A Little Life. She lives in New York City.