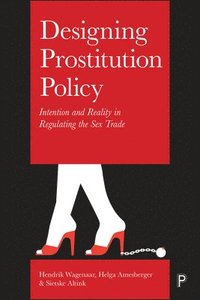 Intention and Reality in Regulating the Sex Trade

av Hendrik Wagenaar, Helga Amesberger, Sietske Altink
Inbunden Engelska, 2017-04-26
859
Köp
Spara som favorit
Skickas inom 7-10 vardagar.
Gratis frakt inom Sverige över 159 kr för privatpersoner.
Finns även som
Visa alla 2 format & utgåvor
Available Open Access under CC-BY-NC licence. While the debate on regulating prostitution usually focuses on national policy, it is local policy measures that have the most impact on the ground. This book is the first to offer a detailed analysis of the design and implementation of prostitution policy at the local level and carefully situates local policy practices in national policy making and transnational trends in labour migration and exploitation. Based on detailed comparative research in Austria and the Netherlands, and bringing in experiences in countries such as New Zealand and Sweden, it analyses the policy instruments employed by local administrators to control prostitution and sex workers. Bridging the gap between theory and policy, emphasizing the multilevel nature of prostitution policy, while also highlighting more effective policies on prostitution, migration and labour exploitation, this unique book fills a gap in the literature on this contentious and important social issue.
Visa hela texten

Hendrik Wagenaar is Professor of Urban Studies and Planning at the University of Sheffield. In 2013 he completed a 3-year international comparative study of prostitution policy. He is a founding member of the COST Action 'Comparing European Prostitution Policies'. He publishes in the areas of citizen participation, prostitution policy, practice theory and interpretive policy analysis. Helga Amesberger is senior researcher at the Institute of Conflict Research in Vienna. Her main research topics are violence against women (current and historical), racism and prostitution policy and she has widely published on these subjects. Her book about sex work in Austria is regarded as standard reference. In 2012 she was awarded the Austrian Kathe Leichter Preis for her work on women's studies and the promotion of equality for women. Sietske Altink has an MA in philosophy and was a researcher at the comparative study of prostitution policy. Since the 1980s she has researched prostitution (for the ministry of social affairs), worked with migrants at the Foundation against Trafficking in Women and managed the Dutch NGO ' De Rode Draad" (Red Thread). She is a key figure in the prostitution debate in the Netherlands and is sought out for her wide knowledge of prostitution policy for lectures, presentations and media appearances.