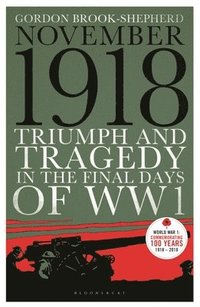 Triumph and Tragedy in the Final Days of WW1

av Gordon Brook-Shepherd
Häftad Engelska, 2018-08-09
219
Köp
Spara som favorit
Finns även som
Visa alla 1 format & utgåvor
The account of the Great War portrayed in this book spans the last hundred days of the conflict; from the surprise blow struck by the British at Amiens on 8 August, down to the signing of the Armistice which ended the war three months later. For the first time all of the sub-plots in the story are given their proper weight, as we see Germany's allies being knocked out one by one. The triumphs and tragedies are told in the words of the witnesses themselves, humble and mighty. Mr Brook-Shepherd's original eye-witness sources range from the eighty-nine-year-old former Empress Zita of Austria-Hungary (the last surviving member of Europe's old ruling order), to private soldiers who fought on both sides of the barbed wire. In describing the death of Old Europe and the suicide of the Empires, the author provides a far-reaching overview of the new world order that dawned in November 1918. The result is a panorama rich in colour and human interest which provides a background to the events of that year; an essential lesson for readers even today.
Visa hela texten

Gordon Brook-Shepherd (1918-2004) studied history at Cambridge, where he took a double first just before the Second World War. He served in various campaigns and ended up as a Lieutenant-Colonel on the staff of the British High Commissioner in Austria. In 1948 he joined the staff of the Daily Telegraph as a foreign correspondent based in Vienna and for the next twelve years traveled widely in Europe, America, Asia and the Middle East, eventually becoming an editor at the Sunday Telegraph. He published many books on military and monarchic history, and in 1987 was awarded an OBE for his services to historiography and journalism.