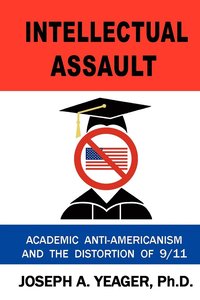 Academic Anti-Americanism and the Distortion of 9-11

av Joseph A Yeager Ph D
Häftad Engelska, 2010-03-16
179
Köp
Spara som favorit
Finns även som
Visa alla 1 format & utgåvor
Intellectual Assault presents parents, students, and academics themselves, with a vivid snapshot of the intellectual climate of America's university faculties and its academic administration. Based upon exhaustive research culling information from every single college and university in the United States, this book uses statements that academics made about the 9/11 terrorist attacks to reveal what they think about America.

Unfortunately, the results are not pretty. For example, many academics believe the United States got its just deserts on 9/11 and even reveled in the atrocity. Moreover, many of them inflicted those views upon students in the classroom.

Intellectual Assault, owing to its extensive documentation and by virtue of the evidence it adduces, lays waste to arguments that anti-Americanism is a fringe phenomenon in academia. It notes the revolting remarks of celebrated academic anti-Americanists such as Noam Chomsky, Ward Churchill and Nicholas de Genova, but more important, demonstrates beyond any reasonable doubt that the attitudes which animate that trio also pervade academia in general. For every Churchill and de Genova, there are literally thousands more like them holding forth in classrooms and holding sway over the academic power structure.

In addition to exposing academia's contempt for America, Intellectual Assault provides concerned citizens with a blueprint for reforming the colleges and universities they are funding with their tax dollars.
Visa hela texten