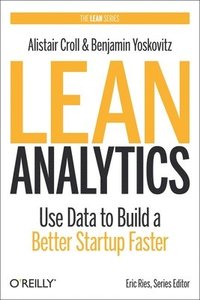 Lean Analytics: Use Data to Build a Better Startup Faster

This book shows you how to validate your initial idea, find the right customers, decide what to build, how to monetize your business, and how to spread the word. Packed with more than thirty case studies and insights from over a hundred business experts, Lean Analytics provides you with hard-won, real-world information no entrepreneur can afford to go without.

Bloggat om Lean Analytics: Use Data to Build a Bette...

Alistair Croll has been an entrepreneur, author, and public speaker for nearly 20 years. He's worked on a variety of topics, from web performance, to big data, to cloud computing, to startups in that time. He's the founder of Coradiant, a web performance startup that raised $20M - then the largest series A in Canadian history - and went through several iterations before finding its product/market fit and being acquired by BMC in early 2011. He's also an investor and partner in a number of startup accelerators, including Year One Labs, Rednod, and Founderfuel. He runs a number of tech conferences focused on cloud computing, big data, and Startups, as well as a variety of local events such as Bitnorth, Startupfest, and Ignite A sought-after speaker and author, Alistair has written several books on web performance and analytics, and spoken widely on such subjects. His "Lean Analytics for Startups" presentation at Le Web covers many of the concepts we'll deal with in the book, and has spoken to investors on several occasions about the impact of data-driven, lean startup approaches have on traditional investing. Alistair is a frequent contributor to technology blogs including O'Reilly Radar, GigaOm, Informationweek, Human 2.0, Bitcurrent, and Solve For Interesting (http://www.solveforinteresting.com). Ben Yoskovitz is a serial entrepreneur with 15+ years experience in web businesses. He started his first company in 1996 while completing university. In 2007 he co-founded Standout Jobs, a B2B software company in the recruitment space. The company raised $1.8M from venture and angel investors. In 2010 after exiting Standout Jobs, Ben co-founded Year One Labs, an early stage accelerator that provided funding and up to 1-year of hands-on mentorship to 5 startups. Year One Labs followed a Lean Startup program, making it the first accelerator to formalize such a structure. Three of five companies graduated from Year One Labs and went on to raise follow on financing. A great deal of Ben's experience and thought leadership around Lean Startup and analytics emerged during this time. Ben has been blogging since 2006. The "Instigator Blog" (http://instigatorblog.com) is recognized as one of the top blogs on startups and entrepreneurship. Ben is also an active mentor to numerous startups and other accelerator programs, including FounderFuel (a TechStars-like program in Montreal.) He regularly speaks at startup conferences and events, including the Michigan Lean Startup Conference, Internet Marketing Conference, etc.