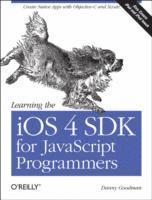 av Danny Goodman
Häftad Engelska, 2011-01-31
269
Köp
Spara som favorit
Skickas inom 7-10 vardagar.
Fri frakt inom Sverige för privatpersoner.
Finns även som
Visa alla 2 format & utgåvor
Is it possible for JavaScript programmers to learn Apple's iOS 4 SDK and live to tell the tale? Technology guru Danny Goodman did, and with this book he leaves a well-marked trail for you to follow. An authority on JavaScript since its inception, Goodman understands the challenges you might face in creating native iOS apps with this SDK, and introduces Xcode, Objective-C, and Cocoa Touch in a context you'll readily understand.

Why bother with the SDK when you can simply build web apps for Apple's iOS devices? Web apps can't access an iPhone's music library, camera, or iOS system software for maps, audio, and more. Nor can you sell web apps in the App Store. If you want to take full advantage of the iPhone and iPad, iOS 4 SDK is your tool -- and this is your book. Includes full coverage of iOS SDK 4.2.

Danny Goodman has been writing about personal computers and consumer electronics since the late 1970s. In 2006, he celebrated 25 years as a freelance writer and programmer, having published hundreds of magazine articles, several commercial software products, and three dozen computer books. Through the years, his most popular book titles - on HyperCard, AppleScript, JavaScript, and Dynamic HTML - have covered programming environments that are both accessible to non-professionals, yet powerful enough to engage experts. His Dynamic HTML: The Definitive Reference, now in its third edition, is an O'Reilly bestseller. To keep up to date on the needs of web developers for his recent books, Danny is also a programming consultant to some of the industry's top intranet development groups and corporations. Most recently, Danny has been programming applications for Apple's iPhone and iPod touch platform. As of March 2010, three of his apps, iFeltThat Earthquake, PhotoSize, and BeaconAid- HF, are available on Apple's App Store. Danny was born in Chicago, Illinois during the Truman Administration. He earned a B.A. and M.A. in Classical Antiquity from the University of Wisconsin, Madison. He moved to California in 1983 and lives in a small San Francisco area coastal community, where he alternates views between computer screens and the Pacific Ocean.