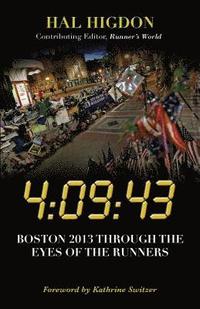 Boston 2013 Through the Eyes of the Runners

av Hal Higdon
Häftad Engelska, 2014-02-13
189
Köp
Spara som favorit
In the first book on this tragic event, 4:09:43, Hal Higdon, a contributing editor at Runner's World, tells the tale of the Boston Marathon bombings. The book's title refers to the numbers on the finish-line clock when the first bomb exploded. In 4:09:43, Higdon views Boston 2013 through the eyes of those running the race. You will meet George, a runner from Athens, birthplace of the modern marathon, who at sunrise joins the eerie march of silent runners, all aimed at their appointments in Hopkinton, where the marathon starts. You will meet Michele, who at age 2 helped her mother hand water to runners, who first ran the marathon while a student at Wellesley College, and who decided to run Boston again mainly because her daughter Shannon was now a student at Boston University. You will meet Tracy, caught on Boylston Street between the two explosions, running for her life. You will meet Heather, a Canadian, who limped into the Medical Tent with bloody socks from blisters, soon to realize that worse things exist than losing a toenail. In what may be a first, Hal Higdon used social media in writing 4:09:43. Sunday, not yet expecting what might happen the next day, Higdon posted a good-luck message on his popular Facebook page. "Perfect weather," the author predicted. "A 'no-excuses' day." Within minutes, runners in Boston responded. Neil suggested that he was "chilling before the carb-a-thon continues." Christy boasted from her hotel room: "Bring it!" Then, the explosions on Monday! Like all runners, Higdon wondered whether marathoners would ever feel safe again. Beginning Tuesday, runners told him. They began blogging on the Internet, posting to his Facebook page, offering links to their stories, so very similar, but also so very different. Over the next several hours, days, and weeks, Higdon collected the tales of nearly 75 runners who were there, whose lives forever would be shadowed by the bombs on Boylston Street. In 4:09:43, Higdon presents these stories, condensing and integrating them into a smooth-flowing narrative that begins with runners boarding the buses at Boston Common, continues with the wait at the Athletes' Village in Hopkinton, and flows through eight separate towns. The story does not end until the 23,000 participants encounter the terror on Boylston Street. "These are not 75 separate stories," says Higdon. "This is one story told as it might have been by a single runner with 75 pairs of eyes." One warning about reading 4:09:43: You will cry. But you will laugh, too, because for most of those who covered the 26 miles 385 yards from Hopkinton to Boylston Street, this was a joyous journey, albeit one that ended in tragedy. This is a book as much about the race and the runners in the race as it is about a terrorist attack. In future years as people look back on the Boston Marathon bombings, 4:09:43 will be the book that everyone will need to have read.
Visa hela texten

"Some would like to forget the horror of the 2013 Boston Marathon. However, many more of us would like to celebrate the unflinching runners, medical staff, and community of Boston for the courage and love they showed each other in marathon's time of greatest need. Hal Higdon's book 4:09:43 is full of inspiring personal stories that reflect how running's worst day may also have been its best." Amby Burfoot Boston Marathon Champion Editor at Large, Runner's World "We realize while reading the marathoners' own words why they will not be stopped by the bombings that took place. It's simple: Love is stronger than hate." Bill Rodgers Four-Time Boston and NYC Marathon Champion "Hal Higdon has captured the absolute dichotomy that was the April 15 Boston Marathon, a very real Tale of Two Cities. It was the best of times and the worst of times, from the beautiful and uplifting marathon celebration that Boston is known for to an absolute day of fear, horror, and mayhem. Told through the emotional lens and perspective of actual runners and other witnesses to terror, the heartfelt story of the 117th running is a complex and sometimes contradictory series of emotions and is at once gripping, sensitive, and inspiring. Runners worldwide and all those who love the Boston Marathon will find 4:09:43 a compelling account of the many emotions of the day as well as a meaningful tribute to its greatness." Guy Morse Former Executive Director of the Boston Athletic Association Organizer of the Boston Marathon, 1985 to 2012 "The Boston bombings broke the hearts of runners everywhere but only reinforced their spirit. Through the stories of some who were actually there, Hal Higdon tells how ordinary runners like us have become indomitable examples to the whole world." Kathrine Switzer First woman to officially run the Boston Marathon Longtime TV commentator on the event Author of Marathon Woman "Higdon's account avoids the political sensationalizing of the events of April 15, 2013. Instead, he tells the story of Boston through the eyes of dozens of participants, revealing what the event means to hundreds of thousands of runners and how the explosions of that day burst into this iconic event and experience. Read this book if you love Boston." Jonathan Beverly Editor in Chief, Running Times "I was there on April 15, 2013, a hundred yards beyond the finish line when the bombs changed an annual ritual of personal achievement into a horror show. But I didn't see everything there was to see, didn't understand all the stories of bravery and loss happening on Boylston St that day. No one person could, which is why this book is so valuable. It's the closest we can come to having been everywhere on that one terrible, miraculous day." Peter Sagal Host of NPR's Wait Wait... Don't Tell Me 2013 Boston MMarathon Finisher "Hal Higdon in 4:09:43 proves that the Boston Marathon consists of every runner in the race and every spectator along the course--and when you attack even one, you attack all." Dave McGillivray Boston Marathon Race Director "I can think of no one better equipped than Hal Higdon to tell this story. It is a story of the special kinship of all of us who have run that final straightaway down Boylston Street toward the finish of the Boston Marathon. And it is the story of how those two explosions were instantly and instinctively felt-from whatever distance we experienced them-to be an attack on all of us. This is an amazing story, skillfully woven together by one of our sport's great chroniclers." John Parker Author of Once a Runner "Hal Higdon uses social me

Hal Higdon has contributed to Runner's World for longer than any other writer. An article by Hal appeared in that publication's second issue in 1966. Author of more than 36 books, including 4:09:43, the best-selling Marathon: The Ultimate Training Guide, and a novel, titled simply Marathon, Higdon has also written books on many subjects and for various age groups. His children's book The Horse That Played Center Field was made into an animated feature by ABC-TV. He ran eight times in the Olympic Trials and won four world masters championships. One of the founders of the Road Runners Club of America, Higdon also was a finalist in NASA's Journalist-in-Space program to ride the space shuttle. The former training consultant for the Chicago Marathon, he answers questions online for TrainingPeaks, also providing interactive training programs. Higdon became acquainted with the Boston Marathon as a member of the U.S. Army stationed in Stuttgart, Germany, training with Dean Thackwray, who would make the U.S. Olympic team in 1956 as a marathoner. Higdon knew then that he eventually needed to move upward in distance from his usual track events (including the 3,000-meter steeplechase) to the marathon. He first ran Boston in 1959, then again in 1960, failing to finish both years. "My mistake," Higdon realized later, "was trying to win the race, not finish the race." It took five years for Higdon to figure out the training necessary for success as an elite marathoner, becoming the first American finisher (5th overall) in 1964. On that journey, he wrote an article for Sports Illustrated about Boston titled "On the Run From Dogs and People" (later a book by the same title) that contributed to the explosion of interest in running in the 1970s that continues to this day. Higdon also wrote a coffee table book titled Boston: A Century of Running, published before the 100th running of the Boston Marathon in 1996. An expanded version of a chapter in that book featuring the 1982 battle between Alberto Salazar and Dick Bearsley, titled The Duel, continues as a best-seller among running books. His most popular running book is Marathon: The Ultimate Training Guide, with a quarter million copies sold, now in its fourth edition. Higdon has run 111 marathons, 18 of them at Boston. He considers himself more than a running specialist, having spent most of his career as a full-time journalist writing about a variety of subjects, including business, history, and science, for publications such as Reader's Digest, Good Housekeeping, National Geographic, and Playboy. Among his more than three dozen published books are two involving major crimes: The Union vs. Dr. Mudd (about the Lincoln assassination) and The Crime of the Century (about the Leopold and Loeb case, featuring attorney Clarence Darrow). Thus, 4:09:43 offers a natural progression in his long career. Higdon continues to run and bike with his wife, Rose, from their winter and summer homes in Florida and Indiana. They have three children and nine grandchildren.