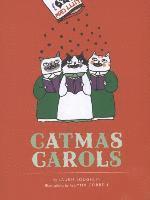 "Witty and whimsical, the lyrics will make anyone who's ever shared their abode with a feline chuckle, and Gemma Correll's illustrations cleverly capture the spirit of felines participating in holiday festivities in their own special way." -Retail Insight

Laurie Loughlin has worked in television production and the medical field. She is an animal welfare advocate. Gemma Correll is an illustrator and comic artist whose work has appeared internationally in books, magazines, newspapers and more, including the New York Times, the Guardian and Family Circle. She lives in Norwich, England.