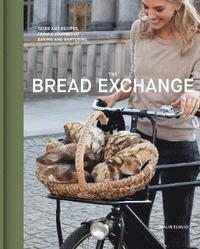 Tales and Recipes from My Journey of Baking and Bartering

av Malin Elmlid
Inbunden Engelska, 2014-10-01
199
Bevaka
Spara som favorit
Tillfälligt slut – klicka "Bevaka" för att få ett mejl så fort boken går att köpa igen.
An ode to a life warmly lived, The Bread Exchange tells the story of one woman's hunger for greater meaning in her life and how it has been enriched by the sharing of her handmade bread. From her cozy kitchen in Berlin to a flat in London, from a deck in New York City to huddling around a tandoor in Kabul, the author shares discoveries, stories, and recipes from her inspiring travels. A busy fashion-industry professional with a bread-baking obsession, Malin Elmlid started offering her loaves to others in return for recipes, handmade goods, and, above all, special experiences that come from giving generously of yourself. Here is a book of tales and reflections, of wanderlust connections, and more than 50 recipes for Malin's naturally leavened breads and other delicious things collected on a journey honoring the staff and the stuff of life.
Visa hela texten

"Before the Bread Exchange was a website and then a book, it was a manifesto. In 2007, Elmlid started making her own sourdough, mostly as a relief from her day job in the fashion industry.A simple idea has fired the imagination of many people in ways Elmlid didn't expect - and never intended. As she explains in the book's introduction: 'I didn't start the project for any of the obvious DIY reasons, or because of the economic crisis in 2008; it wasn't inspired by religion and it wasn't a backlash against our consumer society.'" 4-page feature and interview in the Observer Food Monthly - 14th September 2014.

Malin launched the Bread Exchange in 2008 while working as a European sales manager for premium brand Levi's Vintage. Swedish by birth, she is now based in Berlin where she writes about travel, food and style for lifestyle and travel publications.